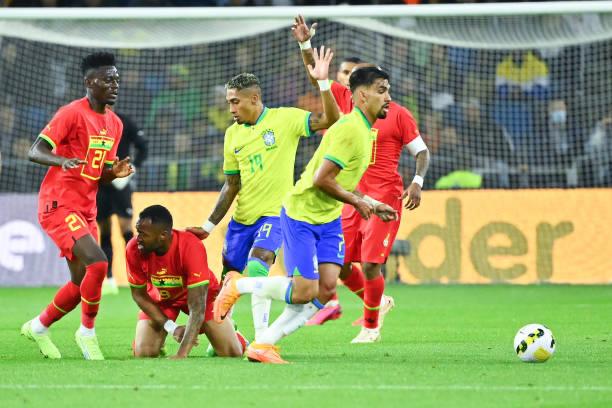 The Black Stars of Ghana suffered their fifth defeat against Brazil on Friday night after losing 3-0 at the Stade Oceane in Le Havre, France.

A Ricarlison brace and another for Marquingos in the opening 45 minutes were enough for Tite’s side to pick up a win.

Despite a much better performance in the second half, Ghana ended the game trailing 3-0.

Here is how the players were rated:

Wollacott, despite conceding three goals, made six saves in the game. He had a much better game in the second 45 minutes of the game.

Odoi had a tough first half trying to stop Vinicius Junior and struggled on most occasions anytime he came up against the Real Madrid star.

Amartey played the entire duration of the game and was arguably one of Ghana’s performers in the game. He made five recoveries and completed two interceptions in the game.

The centre-back won all three of the tackles he competed and managed four clearances although there was very little he could do about the goals conceded.

It was a decent outing for the Reding defender who was making a return to the starting line-up, being picked ahead of Gideon Mensah.

Playing as the lone pivot at some point, Iddrisu struggled defensively and his control when in possession was not the best against the Selecao.

After a disappointing opening half, Kudus returned from the recess with glimpses of his quality, as he created three chances. On the defensive side, he won three tackles.

Andre was the closest player to finding the back of the net but his header from inside the box came off the crossbar. Just like most players, Andre also had a better second half.

Kamaldeen struggled playing as the right winger and was taken off after just 45 minutes. He had 27 touches of the ball during his time on the field.

Jordan played the entire duration of the game and came into the picture a couple of times when Ghana carried the ball from their own half. He was however helpful in helping out in defence.

With his lack of experience, the teenager struggled as the lone striker in the game as he barely made the Brazil defence work. He had just 13 touches in his 45 minutes of action.

Making his first appearance for the Black Stars, Salisu slotted in well and misplaced just three of his 25 passes. The Southampton star looked comfortable playing as the third centre-back in the second half.

Inaki Williams was presented with some good opportunities when he came on and kept making runs, a part of his game which was missed in the opening half.

It was just a first outing for him and he looked decent. He tracked Rodrygo Goes quite well after coming on.

His introduction was needed as Baba Iddrisu looked shaky in the last minutes of the game. He brought a bit of stability to the midfield.

He had little time to make any impact in the game.

DISCLAIMER: The Views, Comments, Opinions, Contributions and Statements made by Readers and Contributors on this platform do not necessarily represent the views or policy of Multimedia Group Limited.
Tags:
Black Stars
Brazil