Police pledge not to interfere with transit truck movement - MyJoyOnline.com

Police pledge not to interfere with transit truck movement 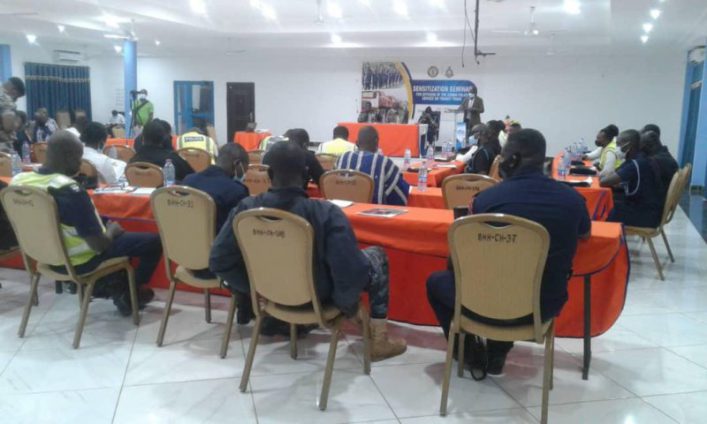 The Upper West Regional Commander of the Ghana Police Service, ACP Peter Ndekugri, has given an assurance that the Police would not interfere with the movement of trucks in transit.

ACP Ndekugri said the order was part of measures his outfit was pursuing towards facilitating transit trade along the country’s transit corridors through the Upper West Region.

“No one should delay a transit truck for more than two minutes… Also, desist from acts that amounted to harassment of the drivers,” ACP Ndekugri cautioned the Police Officers.

ACP Ndekugri expressed the commitment in a remark at a sensitization seminar for police personnel in the region on transit trade organized by the Ghana Shippers Authority (GSA) in Wa.

He said the police officers would not interfere with transit trucks that used the corridors through the region as part of efforts to help promote transit trade agreements and protocols between Ghana and the international community.

The GSA has cited many police barriers and checkpoints along the trade corridors, which caused unnecessary delays and its attendant harassment of transit truck drivers as impediments to transit trade.

The Authority says the Tema-Hamile corridor alone has 64 checkpoints while the Tema-Paga corridor has 68 checkpoints, which impede the free flow of transit trucks.

The Chief Executive Officer of the GSA, Madam Benonito Bismarck, in a speech read on her behalf, noted that a study conducted by the GSA in 2015 showed that Ghana made gains of about $34 million through transit trade.

She said the international community had enacted trade legislation and protocols as part of efforts to facilitate international trade between landlocked countries through the sea coast.

She identified some of those legislations to include the International Convention on Multimodal Transport of Goods (1982) and the WTO Trade Agreement (2013), among others.

Madam Bismarck noted that despite the benefits of transit trade along Ghana corridors, there had been several road governance challenges between transit truck drives and key state actors such as the
Motor Traffic and Transport Department (MTTD), Customs and the Ghana Highway Authority, among others.

Mr Bashiru Haki, Principal Freight and Logistics Officer at the GSA, noted that the sensitisation became necessary due to the crucial role police played in transit trade, including ensuring safety along the corridors.

“Any delay makes our corridors uncompetitive. So we are calling on the police to see how they can expedite action so that the trucks will move smoothly”, he explained.

The Director of MTTD at the Police Headquarters, Superintendent Samuel Sasu-Mensah, urged the police officers, who manned the checkpoints and barriers along the corridors, to ensure professionalism in their dealings with transit truck drivers while ensuring the needed safety on the road.

He entreated the officers to be abreast with the traffic regulations to discharge their duties professionally.

The GSA said the sensitization was premised on the financial advantages of transit corridors to Ghana as well as the need for landlocked countries such as Burkina Faso, Mali and Niger to have access to the sea coast to engage in international trade.