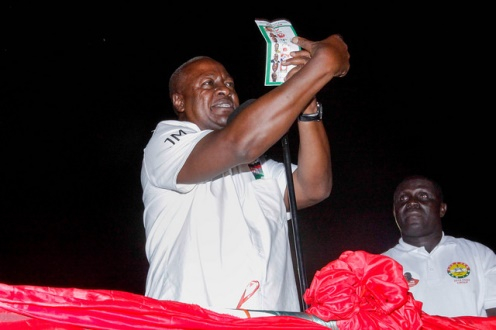 The major political parties have stepped up voter education across the country seven days to the December 7 presidential and parliamentary elections.

Holding a sample ballot in demonstration, the parties showed their positions on the paper and told the electorates to look out for their emblem when they are handed the ballot.

They want to reduce the number of spoilt and rejected ballots which have characterised the six previous elections.

The National Commission for Civic Education (NCCE) is constitutionally mandated to undertake voter education in the country, however, the Commission's efforts are hampered due to lack of funds.

Funds allocated to the Commission by the central government has been inadequate to cover its administrative expenses, officials of the NCCE have said.

With over 15 million votes at stake in the upcoming elections, the presidential candidates do not want to yield turf to their opponents. They want to win the election.

Presidential Candidate of the governing National Democratic Congress (NDC), President John Mahama has been telling the electorates to look for the umbrella which is the symbol of the party.

'On the presidential ballot paper, you will see seven candidates and I am number three. You will see my picture and place your thumb on the white box,' he told some NDC supporters in the Central Region, Monday.

'It is only when you have done this that you can say you have voted well,' he added holding a sample paper in a demonstration.

The New Patriotic Party (NPP) has also taken its voter education to party supporters across the country.

Former Information Minister under the Kufuor administration, Steven Asamoah Boateng has told NPP supporters to look for the elephant which is the party's symbol and place their thumb in the white box by it.

'In the process of voting, if you realise that you have made a mistake, go back and take a new ballot and make sure you locate the NPP before voting,' he said.

Mr Asamoah Boateng charged them to change their "deplorable condition" by voting out the NDC in the elections.

'When you look at the ballot paper, you will see me in Kente and with my rimmed glass and signature moustache,' he said.

'Vote for me and the parliamentary aspirants,' he added.