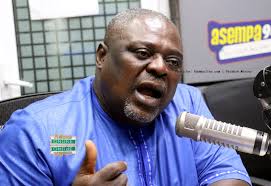 According to the former NDC Deputy General Secretary, the Commission has proven that it can deliver satisfactorily once the various political parties act in line with the laid-down procedure.

This comes in the wake of calls for the Inter-Party Advisory Committee (IPAC) to be giving legal backing, which some say, will maximize input made on the platform.

But Mr Anhyidoho is of a different view.

He sees the recurrent antagonism exhibited between the political parties as what fuels mistrust for the country’s elections management body.

In a statement, he indicated that “if IPAC gets legal backing, what happens to the aspect of the Constitution that bars any individual/body from giving “instructions” to the EC in “doing its work”?”

“Quoting Dr Afari-Gyan, the longest-serving Chairperson of the EC in the history of the country, this is how his thoughts were captured, “He said discussions on electoral reforms should not be the sole preserve on political parties and the EC.

“The electoral process belongs to the people of Ghana, so it is proper for individuals and groups, particularly election-related civil society organisations, that so wish, to contribute to the discussion …” Daily Graphic, Monday, September 27, 2021.”

Read his full statement below:

“The Constitution clearly says that in doing its work, the EC should not take instructions from any person or body external to the Commission. The IPAC is such a body. Accordingly, IPAC decisions cannot be binding on the EC.  If they were, it would, in effect, amount to nothing less than meddling with the independence of the commission”.  Daily Graphic, Monday, September 27, 2021. Page 03.

Specifically, Article 46 of the 1992 Constitution which clothes the, INDEPENDENCE OF THE COMMISSION, states: “Except as provided in the Constitution or in any other law not inconsistent with this Constitution, in the performance of its functions, the Electoral Commission, shall not be subject to the direction or control of any person or authority.”

The renowned academic that he is, and after decades of looming large over the electoral stratosphere of Ghana, it comes as no surprise to me that, Dr Kwadwo Afari-Gyan, as quoted in the opening paragraph, has appropriately given vent to his thoughts vis the call by certain voices for the Inter-Party Advisory Committee (IPAC), to be given statutory status.

For the records, IPAC was created by the Electoral Commission (EC), as an Administrative Organ that provides political parties with a more than fair opportunity to constantly and continuously dialogue/share ideas on a common platform with the EC for the healthy enhancement of our democratic and electoral processes.

That is to say, the EC, out of the goodness of its heart, created IPAC.

The voices that are calling for an Administrative Advisory Committee to be given legal backing; did they decide to be nettlesome with their line of thought or do they really believe that their voices will find acceptability within the equilibrium of the hearing space of the ears of the nation?

What could possibly have enveloped the thoughts of those calling for IPAC to be given powers to invariably usurp the constitutionally mandated powers of the EC?

What is the main reason underpinning the call for IPAC to be given legal legs to stand on?

According to those voices, IPAC should be given legal status because the EC tends to “ignore its concerns or even marginalise it”.

What are the concerns that have been ignored and/or marginalised?

Concerns that tend to dictate to the EC and expressly flout Article 46 of the 1992 Constitution?

We should give IPAC legal status just because some voices believe that the EC is refusing to do their bidding? Is that what the voices are demanding?

Is this reason compelling enough for the nation to run our electoral process into a dark alley via IPAC being given legal status?

So, just because of some spur-of-the-moment and staccato thinking, we should all accept to allow political parties to have the final say-so on the manner in which the EC functions?

The voices that are advocating for legal status for IPAC: instead of giving as a raison d’etre, are giving us nothing but a raison d’etat!!!

As an advisory body, has anything stopped the IPAC from boldly sharing thoughts and helping the nation broaden its electoral landscape positively?

Indeed, during the 2020 General Elections, as an additional part of the EC’s open-door consensus-building policy, the Atta-Mills Institute was one of the twenty-seven (27) Local Ghanaian Observer Groups officially accredited to observe the Presidential and Parliamentary elections across the sixteen (16) Regions of the Republic of Ghana.

For the records again, it was not only in 2020 that Local Observer Groups had the opportunity to observe the General Elections of the Republic of Ghana.

If we have built consensus over the decades, why do we want to enforce consensus?

Come and let us dialogue to have a meeting of minds as far as acceptable consensus-building is concerned; you now want to be given the kind of authority that will make you usurp my functions and undermine my authority?

Is it the case that those calling for IPAC to be given legal status, are asking the EC to become a slave to its own appreciated sense of altruism?

Why flirt with disaster when disaster is not promiscuously begging to be flirted with?

Certainly, the supply of oxygen is insufficient in the argument of those seeking to dare dream about the remote possibility of IPAC having legal legs to stand on within the corridors of the EC.

Even as IPAC is an Advisory Body, have we not already had enough of the manner in which the political parties keep clogging our ears with their labyrinthine cacophony depending on who is in opposition or the party which perceives the EC Chair to be a political adversary?

After almost thirty-two (32) years of the two main political parties sharing the cake equally (NDC has done 16 years and the NPP is on the verge of also doing 16 years), is it not ipso facto that if we allow the political parties any more operational space than they currently enjoy within the ambit of the EC, the EC will end up with its head on the ground and its legs in the air?

In other words, the political parties have proven without a shred of doubt that given the opportunity, the EC will run elections according to the say-so of the parties.

And to the extent that the political parties, (at least the two larger ones), will never see eye-to-eye and will always want to have the advantage over each other in order to saddle the governance horse, would the nation not be calling for chaos if any form of legislation is allowed to back IPAC?

Then again, if IPAC gets legal backing, what happens to the aspect of the Constitution that bars any individual/body from giving “instructions” to the EC in “doing its work”?

The voices that are claiming to love democracy so much that they want the EC to be at the beck and call of politicians; those politicians, have they opened up the space within their political parties for that kind of utopian democracy to fester unchecked?

How many of the political parties really get the base of their parties involved in hardcore decision-making?

At the congresses where they effect changes to the constitutions; do Parties really allow for deep and proper debates before amendments are made?

Do they not just go and throw dust into the eyes of the unsuspecting masses and ratify amendments that have already been made by Accra-based oligarchs on the blind side of the masses?

As the saying goes; people should learn to remove the huge logs out of their eyes before attempting unashamedly to remove the specks out of the eyes of others.  Charity, they say, begins at home.

Political Parties should first broaden the space for real and effective participatory democracy within their fold, before wanting to champion some death-trap course of forcing the EC to allow political parties to run elections in Ghana.

Is it not better to dialogue and build consensus rather than drape IPAC in legal garb that will only end up putting and irremovable noose around the neck of the EC and lead us into disastrous endless pit?

If it is the case that the political parties cannot build consensus any longer, it would be better for the EC to disband IPAC’s Administrative Existence rather than allow an amorphous grouping to become more than an amoeba-like leech.

Political Parties must realise that the art of politicking and canvassing for votes, is, both an art and science.

Politicking is not a venture for cluelessness and empty propaganda because, the art of winning elections is steeped in, scientific gathering and analysis of data.

Planning and strategizing are the surest ways of winning any election and not a dependence on the EC to rig elections in your favour.

With the existing transparent voting and counting system in Ghana, political parties must invest in training agents who have the capacity to master the procedures and process governing the electoral chain.

The question is; does the Electoral Commission of Ghana have the capacity to rig elections in favour of political parties?

If the answer is yes; then, that would only be possible if political parties conspire to position agents who know next to nothing about the electoral/voting/counting/collating processes.

All said, when political parties lose elections in Ghana and continue to blame the EC and cry foul; it is because the parties refused to prepare adequately for “war” by way of knowing itself; knowing the “enemy”; and deciding on the best way to defeat the “enemy”.

Of course; the EC as a human institution, can be compromised but that would only happen in large measure if political parties are ill-prepared.

It would have been remiss on the part of Dr. Kwadwo Afari-Gyan, if he had kept quiet over such a crucial matter and allowed it to be misconstrued that his silence is akin to, his consent.

For all the good reasons, there is no way the nation should allow, “tenant” IPAC, to become a “landlord” in the rented accommodation of the EC.

As it is, our elections brew more than enough tension; let us not add needless and uncalled for fire to the heat!!!

Quoting Dr. Afari-Gyan, the longest-serving Chairperson of the EC in the history of the country, this is how his thoughts were captured: “He said discussions on electoral reforms should not be the sole preserve on political parties and the EC.  The electoral process belongs to the people of Ghana, so it is proper for individuals and groups, particularly election-related civil society organizations , that so wish, to contribute to the discussion …”. Daily Graphic, Monday, September 27, 2021.

In absolute concordance with Dr. Kwadwo Afari-Gyan, electoral reforms CANNOT be the in the minds and bosom of only the representatives of political parties.

Surely, Ghana does not, and cannot belong to only political parties!!!