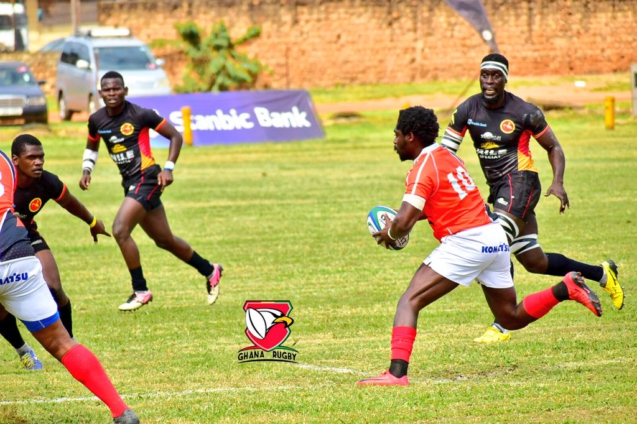 The Ghana Rugby national team are on a redemption exercise after losing 53-12 against Uganda in their opening Rugby Africa Cup campaign.

The game was part of the qualification process for the 2023 World Rugby Championship in France.

Ghana’s Black Eagles succumbed to a humiliating loss against hosts Uganda at the Kyadondo Rugby Club in the Africa Rugby Cup on Saturday afternoon in Kampala.

Deputy skipper of the Eagles, Prince Boamah in an interview with Joy Sports blamed the defeat on in-house politics that resulted in poor preparations.

‘’Seeing these politics going on here and there, it really affected our preparation for this tournament. It’s not been easy because as we speak now, the Ghana Rugby account has been frozen but yet still, Mr. Herbert Mensah made it possible for us to get to Kampala. All these politics here and there really affected our performance in the first game but the hope isn’t lost yet because we still have our second game against Algeria which comes on this Wednesday.’’

Boama has been motivating the team alongside the captain of the side to improve the spirit ahead of the next game.

‘’Myself and the captain Selorm have tried our best to bring the guys together to motivate ourselves and make sure come Wednesday, we come out with a victory. We’ve told the guys that this is our time our time even though our preparation was very poor, because we didn’t have much time to prepare for this tournament.’’

He concluded saying that, the game against Uganda was used to test themselves.

‘’We even took this Uganda game as our first test match even though we lost, that’s how we see it but come Wednesday, we’re going to the game fully prepared with a correct mindset which we believe will give us a positive result at the end of the game”

Ghana must bounce back stronger in their second game against Algeria on July 14. The West Africans are in Pot C together with Algeria and Uganda.

The top two teams from the three-team group will progress to Round 3 as the road to 2023 World Rugby Championship in France continues.