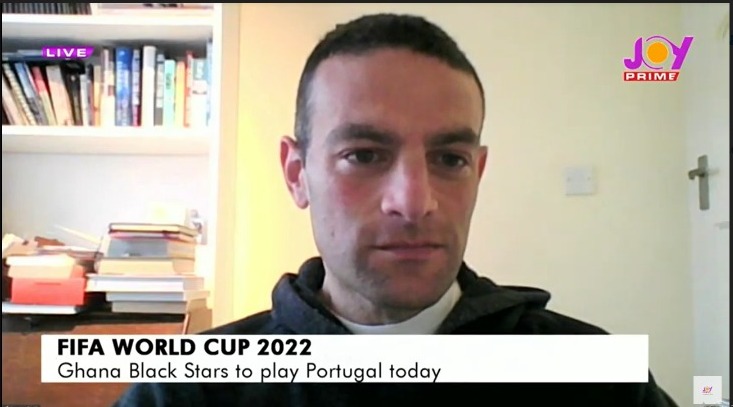 French football Writer, Jeremy Smith has predicted ahead of the match between Ghana and Portugal happening later today.

Speaking on Prime Morning during the early hours of Thursday before the match, the French writer indicated that Portugal could be surprised by the performance of the Black Stars.

According to him, Portugal is dependent on Cristiano Ronaldo (Portugal’s captain), who could press the team down. On the other side, he believes Ghana has a strong team and is determined.

He said, “Although Portugal stands to gain a favor, they’ve got a very strong team on paper. I think it’s going to be really tight, and Ghana could snatch a draw or maybe a very narrow victory. I think Portugal could be surprised today.”

He also stated that Ghana has a better chance of winning against Portugal.

The writer attributed this to the fact that most African countries are underrated, saying Portugal is reluctant to believe that Ghana will lose.

Even though Portugal is embedded with a strong team, he believes players including the Ayew brothers, Mohammed Kudus, Inaki Williams create an advantage for Ghana to make a win.

Meanwhile, France-based sports journalist Mohammed Qoutb is of the opinion that Saudi Arabia’s win over Argentina has paved the way for other teams that may have lost hope of winning.

“Saudi Arabia has paved the way for all what they call small teams to just do the same thing. We’ve seen Japan. So, everything is possible and the fact that this inspiration has come earlier under the tournament, they just have to make good use of it,” he said.

He thinks Ghana can perform better than Saudi Arabia and Japan.

DISCLAIMER: The Views, Comments, Opinions, Contributions and Statements made by Readers and Contributors on this platform do not necessarily represent the views or policy of Multimedia Group Limited.
Tags:
Ghana
Prime Morning
Qatar 2022 World Cup