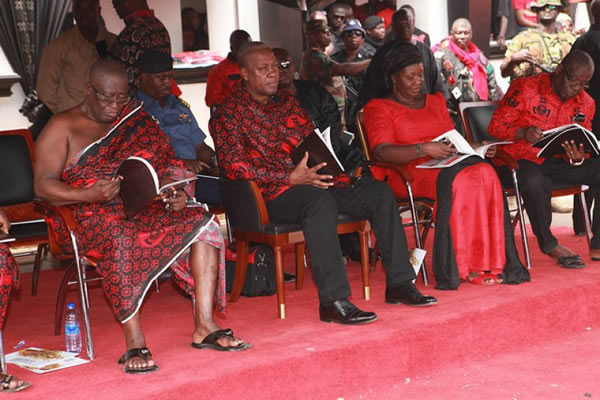 The President John Dramani Mahama on Friday joined the Chiefs and people of Akropong in the Eastern Region to mourn the late Okuapemanhene, Oseadeeyo Addo Dankwa.

President, Mahama in his tribute to the late paramount chief intimated that the late Oseadeeyo Addo Dankwa, was more than a father to him and he therefore has an obligation to mourn him appropriately, just like any of Nana’s children.

President Mahama said this when he visited Okuapeman to formally pay his tribute to the late Chief as part of the funeral rites for Oseadeeyo Addo Dankwa.

Oseadeeyo Addo Dankwa acceded the throne in 1974 and ruled for nearly 41 years until his death in July last year.

President Mahama donated a carton of schnapps, 20 crates of assorted drinks, 20 cartons of bottled water and a cash of â‚µ10,000 towards the funeral.

He assured Okuapeman of government’s full participation, promising a delegation led by the Vice President, Kwesi Amissah Arthur, will be present on Saturday for the burial rites.