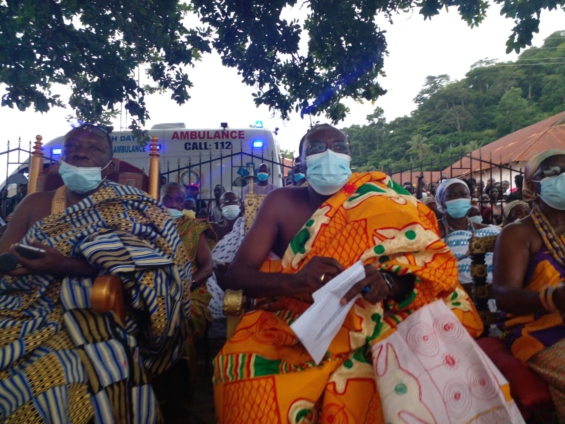 The President of the Volta Regional House of Chiefs, Togbe Tepre Hodo IV has appealed to government for bitumen service to the Anfoega Akpokofe to Anfoega Aveti road.

According to Togbe Tepre Hodo IV, the road in its current state is not motorable and accessible.

“We are of the view that the road should have bitumen to prevent it from deteriorating, ” he said.

Togbe Tepre Hodo IV made the appeal when President Akufo-Addo paid him a courtesy visit in Anfoega during his tour of the Volta Region on September 10.

He noted that the stretch is a major road that connects Anfoega to the regional capital through Afadzato and communities along the road that are food baskets in the area.

During the meeting, Togbe Tepre Hodo IV also appealed for the extension of water supply to affected communities in North Dayi District, and construction of the office complex of the Ghana Education Service to enable the directorate of education to work effectively and efficiently.

In response, the President gave his word that the issues raised would be resolved.

President Akufo-Addo who was in the company of the Volta Regional Minister, Dr Archibald Yao Letsa, MP for Hohoe constituency, John Peter Amewu, Dan Botwe, Pius Enam Hadzide and others continued his tour to the University of Health and Allied Sciences where he cut the sod for the second phase of the University project.