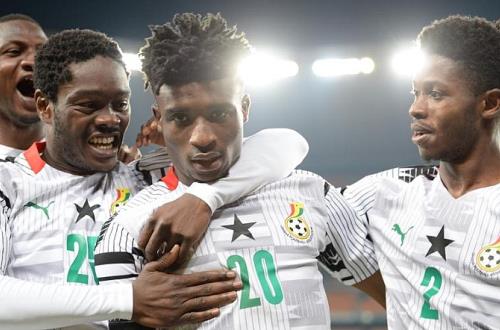 Ghana have already a booked their ticket to next year’s Africa Cup of Nations (AFCON) and the final group game against São Tomé and Príncipe on Sunday is just a mere formality.

The Black Stars have a better head to head than South Africa and Sudan who play each other on matchday six of the qualifiers. Regardless of the result in that crunch tie, Ghana will still qualify as one of the best two teams in group C.

São Tomé and Príncipe on other hand have no a zero chance of qualifying, they currently sit bottom in the group with no points registered whilst conceding 13 goals.

The game is expected to be played behind closed doors in Accra as both teams aim to finish strongly.

Despite securing qualification, Ghana will want to top Group C and make a statement to the rest of Africa. The four-time AFCON winners haven’t won the continental showpiece in 40 years and are desperate to return to the summit of African football.

The Black Stars made their qualification process a little more stressful than it should have been and would love to appease fans with a big victory in the last round of games.

Charles Akonnor’s men got a much needed draw in South Africa but the performance was one that can be vastly be improved on.

And that will be the aim of Akonnor; to use this game to restore confidence in the camp and amongst the fans.

São Tomé and Príncipe present a good avenue for the Black Stars to make amends. The Falcons and True Parrots Team haven’t won a game since 2019 and are currently on a streak of losing five straight games.

They come into the game on the back of a 2-0 defeat at home against Sudan.

When the two sides met in the reverse fixture, Ghana narrowly won by a solitary goal scored from the spot by Jordan Ayew.

Akonnor welcomes back his trio of captain Andre Ayew, Thomas Partey and Jordan Ayew. All three didn’t travel to South Africa as they would have had to quarantine upon their return to England.

Ghana suffered no injury or suspensions and will have the full complement of players called. Baba Iddrisu of Mallorca didn’t travel to Ghana because of his club’s lack of depth in his position.

It is expected that Akonnor will name a strong starting XI as he aims to impose his tactics on the team. With less than a year to next year’s AFCON, it’s understandable that Akonnor is failing to take his foot of the pedal.

São Tomé and Príncipe head coach Adriano Eusebio named 11 overseas-based players in his squad for their clashes with Sudan and Ghana with Belenenses SAD starlet Ricardo Cardoso part of the team.

With Akonnor expected to name strong starting XI, the Black Stars should have enough in their tank to dispatch São Tomé and Príncipe. The Ghana team playing at home will prove to be too much to handle for The Falcons and True Parrots Team.

DISCLAIMER: The Views, Comments, Opinions, Contributions and Statements made by Readers and Contributors on this platform do not necessarily represent the views or policy of Multimedia Group Limited.
Tags:
Black Stars
Black Stars squad
Charles Akonnor
CK Akonnor
Owuraku Ampofo