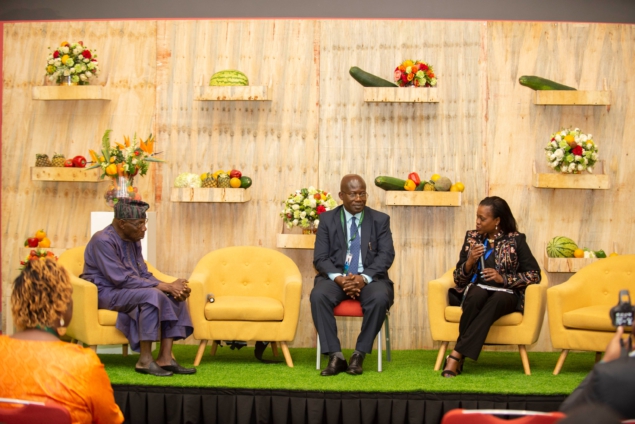 Founding director of the West Africa Centre for Crop Improvement (WACCI) at the University of Ghana Prof. Eric Danquah, has been named winner of the Africa Food Prize 2022.

Prof. Danquah was selected among over 370 nominees from 44 countries who competed for the prize this year.

He was awarded the prize for his outstanding expertise, leadership, and grantsmanship skills that led to the establishment and development of WACCI as a world-class centre for training plant breeders in Africa for Africa.

The announcement was made by the Africa Food Prize Committee chairman and former Nigerian President Olusegun Obasanjo, during the annual Alliance for a Green Revolution Forum (AGRF 2022) in Kigali – Rwanda.

Prof. Danquah is the first ever Ghanaian to win the award. Previous winners have included Dr. Akinwumi Adesina who is currently president of the African Development Bank Group, the the late Meles Zenawi who is a former Ethiopian Prime Minister, Dr. Agnes Kalibata who is a former Minister for Agriculture in Rwanda and current president of AGRA, Dr. Kanayo Nwanze who is former president of the International Fund for Agricultural Development, among others. Corteva, Kenya Commercial Bank, UPL, and the Alliance for a Green Revolution in Africa (AGRA), led the organisation of the 2022 Africa Food Prize.

Who is Prof. Eric Danquah?

Prof. Danquah is a Ghanaian plant geneticist, and a former director of the Biotechnology Centre at the University of Ghana.

He founded WACCI in 2007 with the aim of “training a new generation of plant breeders to develop improved varieties of staple crops in West and Central Africa”.

Through his leadership, WACCI has attracted more than US$30 million of research and development funding, and trained more than 120 PhD and 49 MPhil students in Seed Science and Technology from 19 African countries.

This has led to the development of about 60 improved seed varieties, including superior maize hybrid varieties, which will help boost yield for farmers and contribute to food and nutrition security.

Today, the institution boasts of a new molecular biology/tissue culture laboratory, a bioinformatics platform, and cutting-edge university farms including a US$300,000 ultra-modern screen house for controlled experiments.

Mr. Obasanjo congratulated Prof. Danquah for winning the prestigious award, describing him as an inspiration: “It is a great privilege to be able to honour and shine a spotlight on the truly remarkable achievements of Dr. Danquah. His leadership in genetic innovation inspires the future of food security and nutrition in Africa, and has made a tangible difference to how a new generation is working to improve African food systems.”

“He has been and continues to be, a true inspiration for many young minds,” the former Nigerian president added.

The committee says this year’s winner selection is a reflection of the importance of promoting science and technology as tools to develop solutions for sustainable food systems.

Commenting on the award, Prof. Danquah said: “I am humbled and I dedicate this to all the giants on whose shoulders I have stood all these years.”

DISCLAIMER: The Views, Comments, Opinions, Contributions and Statements made by Readers and Contributors on this platform do not necessarily represent the views or policy of Multimedia Group Limited.
Tags:
Africa Food Prize 2022
Prof Eric Danquah