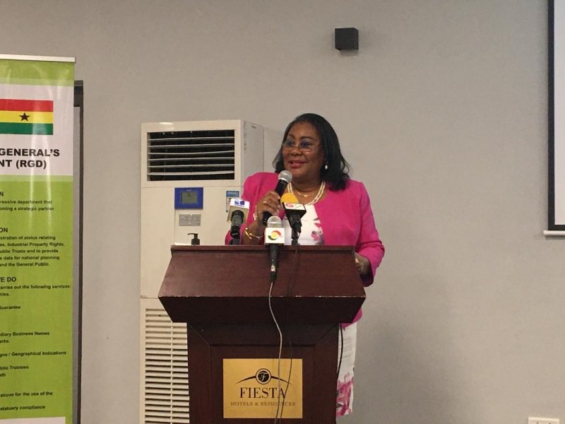 She said the directive applies to businesses under the Legacy data, thus, businesses already in existence before the RGD deployed the BO register in October 1, 2020 and that failure to comply would attract sanctions.

New applicants as of January 1, 2021, are also to download the forms, fill out their BO Information and attach them to the registration documents.

“It is the responsibility of companies to keep a Register of Members in which they shall enter all details of their Members and Beneficial owners and verify their BO information before onward transmission to the Registrar of Companies.

“We’ve been talking about this, but I don’t think they took us seriously. Henceforth, they will see how serious we are,” the Registrar General, said.

Mrs Oware gave the directive on Tuesday during a media workshop organized by the RGD on the concept of BO Information.

The Registrar-General said BO Transparency was introduced by governments across the world to promote transparency and a fair playing field for businesses.

She said it also minimised domestic and cross-border bribery and corruption, fraud and illegal financial transactions.

Mrs Oware said the Companies Act, 2019, (Act 992) provided for the collection of data on BO on all companies, adding that the BO regime required the declaration of the true owners of every company operating in Ghana.

She said the information would be held in a Central Register by the Registrar of Companies and made available to Competent Authorities like the Financial Intelligence Centre, Economic and Organised Crime Office (EOCO), Ghana Police Service, the Commission on Human Rights and Administrative Justice (CHRAJ), and business community and the public upon request to promote business transparency.

The Registrar-General said all Companies would be required to submit BO information at the time of incorporation, during the filing of annual returns and whenever they wanted to make changes to their details.

The Companies Act defines a Beneficial Owner as an individual who directly or indirectly ultimately owns or exercises substantial control over a person or company.

He or she is the person on whose behalf a transaction is conducted; or who exercises significant control or influence over a legal person or legal arrangement through a formal or informal agreement.

Thus, a BO of an entity is, therefore. a person who will enjoy the economic rights stemming from the entity, regardless of whether the person is also the legal owner on record- that is, whether the entity’s ownership is registered in his or her name.

The RGD Legal Team, Madam Elizabeth Osae Omane said a person who failed to provide the information required or provided false or misleading information to the Registrar committed an offence and was liable on summary conviction to a fine of not less than fifty penalty units and not more than two hundred and fifty units or to a term of imprisonment not less than one year and not more than two years or both.

Also, she said, where a company defaulted in complying with the law, the company and every officer of the company were liable to pay to the Registrar, an administrative penalty of twenty-five penalty units for each day during, which the defaults continued.