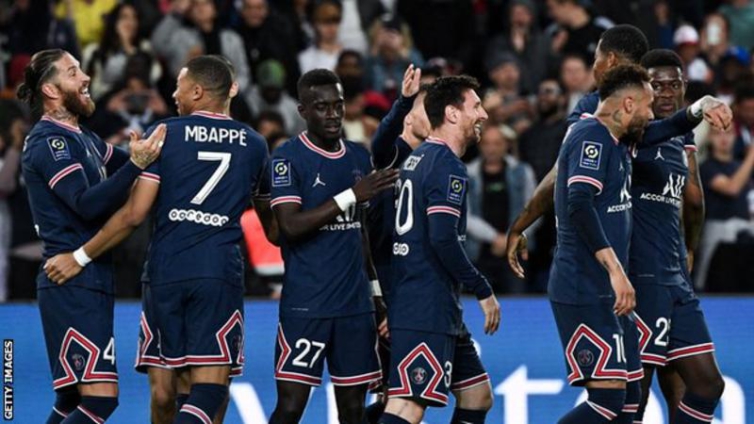 Paris St-Germain confirmed a record-equalling 10th French title with four games to spare despite being held by 10-man Lens – but fans left early to celebrate outside the stadium without the players.

Lionel Messi’s stunning curled strike looked set to seal victory in style for the hosts, who required only one point to clinch the league.

But despite Kevin Danso’s dismissal for a second booking, Corentin Jean equalised for a spirited Lens late on.

It is Mauricio Pochettino’s first league triumph as a manager.

He said: “We are going through a difficult period with the fans and we hope it will get better. We’re in a democracy and we accept all protests. But we have to show respect for this title.”

The club’s ultras, annoyed by the club’s Champions League exit to Real Madrid, started to leave the stadium 15 minutes before the final whistle rather than celebrate with the players.

The ground was empty 10 minutes after full-time and the players did not do a lap of honour afterwards.

“That’s something I don’t understand,” midfielder Marco Verratti said. “I know that they were disappointed about Madrid, but at some point you have to move on.”

“The atmosphere is a shame,” PSG captain Marquinhos told Canal+ at full-time. “Football is our passion. We’ll try to have as much fun as possible. It’s a shame that won’t be with the supporters but we have to deal with it.”

Neymar, Kylian Mbappe and Achraf Hakimi all had chances at close range in the first half as PSG livened up after an underwhelming start.

The hosts were booed off after a goalless first half, however, and Jonathan Clauss was denied by Keylor Navas with an increasingly confident Lens’ best chance before the break.

Lens goalkeeper Jean-Louis Leca had to be alert when Mbappe was played through by a free-kick, but it was not until Danso’s sending off that PSG were able to truly assert themselves.

Even then, it required a moment of brilliance from Messi, who has endured a frustrating first season in Paris with this just his ninth goal of the campaign across all competitions.

But Pochettino’s side failed to extend their advantage and were made to pay by a Lens side chasing a European place, as Jean turned in Deiver Machado’s cross.

Pochettino leads PSG to title – but will it be enough?

PSG have now won eight of the past 10 Ligue 1 titles, with this latest triumph taking them level with St-Etienne for most wins in the professional era.

They finished one point behind Ligue 1 winners Lille last season, but this term they have sealed the 2021-22 title with an emphatic 16-point advantage over closest challengers Marseille.

However, they did maintain their unbeaten home record in the league, which now stands at 15 wins in 17 games.

And despite this inevitable league triumph the Argentine’s future in Paris remains uncertain, having been linked with Manchester United until Erik ten Hag’s appointment earlier this week.

It remains to be seen what decisions chairman Nasser Al-Khelaifi will take this summer, with the elusive Champions League triumph which the club’s Qatari ownership craves once again not delivered this campaign.

DISCLAIMER: The Views, Comments, Opinions, Contributions and Statements made by Readers and Contributors on this platform do not necessarily represent the views or policy of Multimedia Group Limited.
Tags:
French Ligue 1
PSG