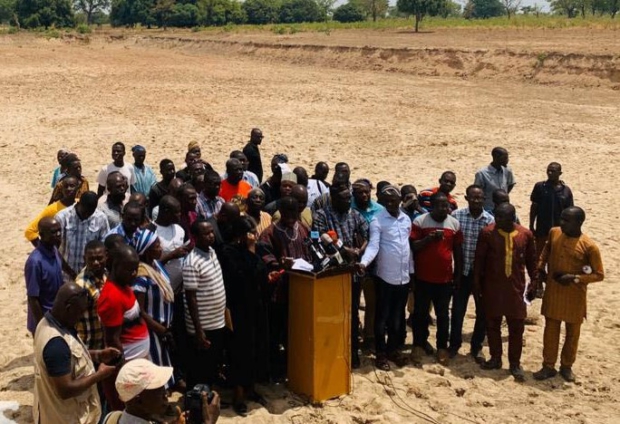 The NDC held a press conference in the middle of one of the dams in the Yendi.

The National Democratic Congress (NDC) has challenged government to publish the full list of completed small-scale dams under the One Village One Dam project.

This follows the Akufo-Addo government’s description of two dams at Adibo and Nakpachie in Yendi as incomplete projects.

This, the opposition NDC disagrees, claiming that the dams are complete but were poorly constructed, causing them to dry up during the dry season.

The party, in a statement Thursday countered government claim saying, “In line with the principle of transparency and accountability, the Akufo-Addo government should publish the full list of their so-called completed 1V1D projects so that the opposition, the media and Ghanaians at large can fact-check and ascertain the veracity of the claims being made by the Ministry.”

The party also wants government “to tell the good people of Ghana in very specific terms, what makes the said 1V1D projects incomplete.

“Simply put, government must explain to Ghanaians, what specific features these two projects lack and how different they are from completed 1V1D projects.”

The NDC also said the policy has led to a financial loss to the state for which they will prosecute the actors who caused what they describe as a “scam.”