Queen Elizabeth II was an embodiment of virtue, courage and affection – Bawumia 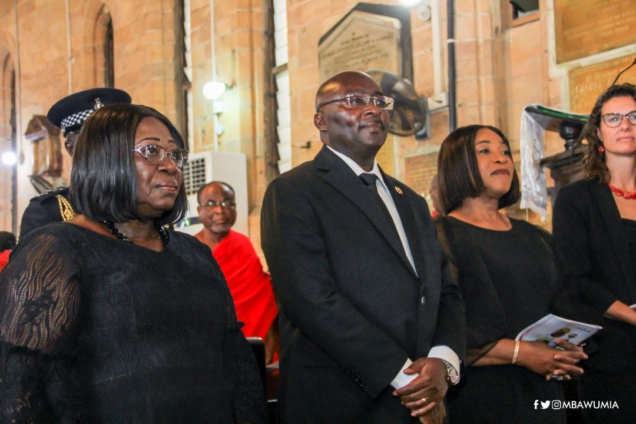 The life of Queen Elizabeth II provides great lessons in selfless public service and leadership worthy of emulation in the modern era, the Vice President Dr Mahamudu Bawumia has stated.

Speaking at a ‘Thanksgiving Service for the Life of Her Majesty Queen Elizabeth II’, which was jointly organized by the Anglican Communion, Ghana and the British High Commission, Dr Bawumia, who represented President Akufo-Addo recalled Ghana’s “historic” relations with the Commonwealth and the Queen, before and even after Ghana gained independence in 1957.

“As a member of the Commonwealth, Ghana has had a historic relationship with the UK, and by extension, Her Majesty the Queen. The passing of Her Majesty the Queen has been received here with heavy hearts, prompting His Excellency the President to direct that all official flags in Ghana fly at half-mast for seven days.

“The highpoints of Ghana’s relationship with her majesty were in the years 1961 and 1999 with her official visits. Indeed, in her 1961 visit, a special high-life tune was composed in her honour called ‘Welcome Your Majesty’.

“Her famous dance with Ghana’s first President and influential Pan-Africanist, Dr. Kwame Nkrumah at a farewell ball in Accra in 1961, was described by scholars as both symbolic and significant to the Commonwealth.”

While acknowledging that the late monarch’s passing came as a shock to the world, Dr Bawumia emphasized that her 96-year-old life and 70 years of reign as Queen of the United Kingdom and the head of the Commonwealth are worth celebrating.

“Her Majesty the Queen showed remarkable leadership in an era marked by strong anticolonial and independence waves on the African continent (1950s and 60s). It is, therefore, not surprising that under her reign the Commonwealth saw such a huge transformation.

“In these roles (Queen of the United Kingdom and the head of the Commonwealth), Her Majesty had a yeoman’s task of overseeing the transition of Great Britain from the tensions of the post-World War II era, especially the Cold War, playing an instrumental role in granting independence to former British colonies, one of which is our beloved Ghana, and contributing immensely to the relative peace the world has enjoyed since the end of the second world war.

“Ladies and gentlemen, as we celebrate a great woman who was an embodiment of virtue, courage and affection, it is my prayer that God will accept her gentle soul to a peaceful rest.

“Once again, on behalf of H.E. the President, Nana Addo Dankwa Akufo-Addo, and all Ghanaians, I wish His Majesty King Charles III, the Royal Family, the people of the United Kingdom and the entire Commonwealth my deepest condolences.”

In a short sermon, the Bishop of the Anglican Diocese of Accra, Rt. Rev. Dr. Daniel S. M Torto, urged Ghanaians to embrace a life of service, noting that the late monarch’s dedication to serving others has had a major impact on the UK, the Commonwealth, and the rest of the world.

“Let us learn to serve. We must be of service to our nation. Do not wait for someone to begin before you join. Be of service to yourself, your family, and the nation at large.”

DISCLAIMER: The Views, Comments, Opinions, Contributions and Statements made by Readers and Contributors on this platform do not necessarily represent the views or policy of Multimedia Group Limited.
Tags:
Bawumia
Dr Mahamudu Bawumia
Queen Elizabeth II