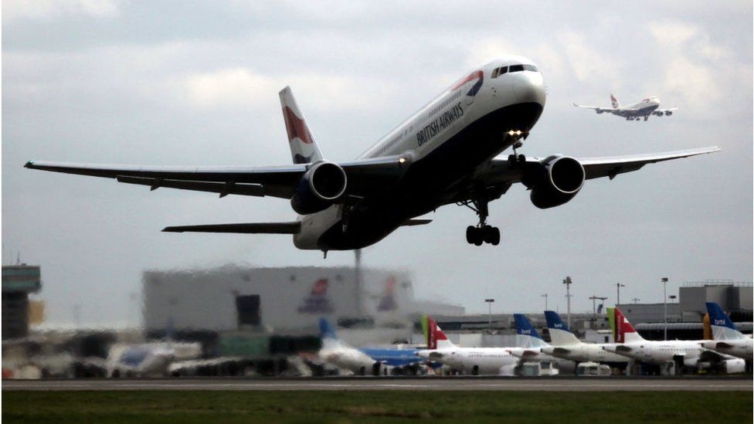 Heathrow Airport has said about 15% of its schedule will be altered on Monday during Queen Elizabeth’s state funeral.

This is to ensure the skies over London fall quiet during the events, it said.

There will be flight cancellations as a result, including 100 British Airways flights and four Virgin Atlantic flights.

Separately tens of thousands of passengers are set to be affected by a French air traffic control strike on Friday.

Among the cancelled flights will be many that fly over France, not just to and from the country.

Heathrow said that all takeoffs and landings on Monday will be delayed for 15 minutes before and after the two-minute silence at the end of the funeral.

Following that, there will be no arrivals between 13:45 BST and 14:20 BST during the procession of the hearse, and no departures between 15:03 BST and 16:45 for the ceremonial procession via the Long Walk to Windsor Castle.

Between 16:45 BST and 21:00 BST, departures will be reduced to support the committal service at St George’s Chapel.

Flights will also be diverted around Windsor Castle “to minimise noise during the private family service and interment”, it said.

n a statement, Heathrow apologised for the inconvenience but said that “as a mark of respect, operations to and from the airport will be subject to appropriate changes in order to avoid noise disruption at certain locations at specific times on Monday”.

The Civil Aviation Authority (CAA) has issued guidance which means that air passengers whose flights are cancelled or badly delayed on Monday because of Heathrow’s changes will not legally be entitled to financial compensation. That is because these are likely to be deemed extraordinary circumstances.

However, airlines are offering customers refunds or re-bookings.

British Airways said its cancellations were on short-haul European flights where multiple services run on the same route, and that it was adding larger aircraft where possible to help customers re-book on operating flights.

Alternatively, they can choose to have a refund. No long-haul BA flights will be affected but some will be re-timed.

Virgin Atlantic also apologised for the inconvenience. A spokesperson said passengers on the affected flights, between Los Angeles, San Francisco and Heathrow, would be rebooked on alternative same-day services wherever possible, or could rebook for later dates, take a voucher or request a refund.

It said the airport and airlines were working closely with the air navigation service provider NATS to minimise the impact of these restrictions on passengers.

A Heathrow spokesperson added that extra staff would be on hand in terminals to support passengers, and that people were encouraged to travel on public transport instead of by car, because roads around the airport would be extremely busy.

Other changes at Heathrow during the period of national mourning include observing the National Moment of Reflection with a one-minute silence at 20:00 on Sunday, showing the Queen’s funeral on screens at the airport on Monday, and closing non-essential shops.

Shops deemed “essential”, such as WH Smith, Boots and Travelex, will remain open along with restaurants, cafes and pubs.

Separately, tens of thousands of passengers are set be affected by a French air traffic control strike on Friday.

Ryanair has cancelled 420 flights, most of which were scheduled to fly over France, affecting 80,000 passengers.

EasyJet is cancelling 76 flights, British Airways will cancel 22, while Air France said it would only run 45% of its short-haul flights.

The SNCTA air traffic control union said the walkout was over wages, as inflation soars, and recruitment.

Ryanair said all passengers affected had been notified this morning. The low-cost carrier normally operates more than 3,000 flights per day.

Neal McMahon, Ryanair operations director, said it was “inexplicable” that thousands of European citizens and visitors “will have their travel plans unfairly disrupted”.

“It is inexcusable that passengers who are not even flying to or from France are disrupted,” he said.

He said French laws protect French domestic flights, but not ones flying over the country.

“It is time that the European Union step in and protect overflights so that European passengers are not repeatedly held to ransom by a tiny French air traffic control union,” he said.

Ryanair called for other European air traffic controllers to be allowed to manage flights over France to ease the impact.

Budget rival EasyJet said it had cancelled flights at the request of French authorities.

EasyJet said: “While this is outside of our control, we would like to apologise to our customers for any inconvenience they may experience.”

British Airways will cancel 22 flights – or 11 return – to and from Heathrow, including some which fly over France. It also said there could be some extra delays on the day.

Air France KLM said the French civil aviation authority – DGAC – had asked airlines to cut their Friday schedules from all French airports by 50%.

Air France said it would only run 45% of its short and medium-haul flights, and 90% of long-haul. It also warned delays and last minute cancellations could not be ruled out.

The flight cuts affect the whole of France, the DGAC said, adding that it was currently working with the European air travel regulator Eurocontrol to help airlines avoid the country’s air space.

Strikes across the aviation industry caused severe disruption to Europe’s summer traffic, including ground and cabin personnel, who sought pay rises to cope with increased living costs amid high inflation.

In July, several strikes by firefighters and staff at Paris’ Charles De Gaulle airport led to cancellations and delays.

DISCLAIMER: The Views, Comments, Opinions, Contributions and Statements made by Readers and Contributors on this platform do not necessarily represent the views or policy of Multimedia Group Limited.
Tags:
Flights cancelled
Funeral
Heathrow
Queen Elizabeth II