Rawlings blames Africa for being passive in global affairs 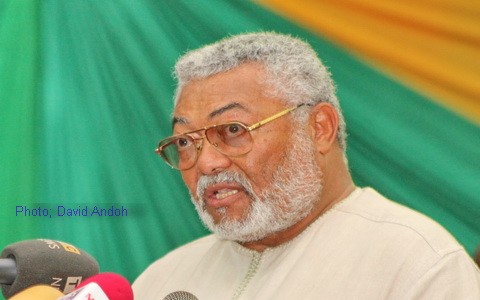 The African continent cannot continue to allow some members of the developed world to interfere and meddle in its affairs, while it becomes a passive observer.

The continent cannot look on while elected presidents are plucked out of their countries and humiliated in a crude manner.

A former President of Ghana, Mr Jerry John Rawlings, made these comments when he was addressing the 10th anniversary celebrations of the Pan- African Parliament in Johannesburg, South Afric,a on Tuesday.

The theme for the celebration was “Ten Years of the Existence of the Pan- African Parliament: Reflections on its Role”.

Today, Libya is but a pale shadow of itself, with militants ensuring, on a daily basis, that political authority does not take root, he lamented.

Mr Rawlings said some Africans had chosen to blame Laurent Gbagbo and al- Qathafi for the fate that befell their respective countries, but he refuted that and said the continent was equally to be blamed for looking on when the global powers entered the continent and virtually staged coups in countries.

“It is significant to note, however, that in the midst of the political turmoil Liljya finds itself, its national football team put up a brave and determined fight to win the CHAN tournament earlier this year,” he said.

He explained that the feat was a ckar manifestation that beneath all the pessimism and negativity laid a spirit of determination which had to be nurtured, guided and supported into a positive governance structure in the continent.

Mi Rawlings said the continent needed to merge its power into one meaningfully strong voice.

The said if the continent was keen on making its voice heard, then it could not continue to procrastinate in the matter of integration.

According to him, Africa has power in numbers and resources. It has power also in size and cultural uniqueness, and this can be blended into a powerful voice of reason.

“Integration may sound ambitious for a huge 54-member organisation, but continued delay further relegates the continent to the depths of irrelevance.

“We need to question why the West is so uncomfortable about the Ukraine and Crimea issue when evidence abounds of gross Western interventions in the recent past, as earlier stated, and in the distant and not too distant past,” he said.

He said the position of the West and their media, with respect to the Ukraine issue, was shocking.

He explained that the inconsistencies of the West, its hypocrisy arid the massive misrepresentation were an insult to the intelligence of the world.

Mr Rawlings said far lesser circumstances hadi elicited the overreaction, as well as the political and military intervention of th6 west, and yet.

a stronger justification from a historical point of view, from a security/military standpoint and the recent political behaviour in Ukraine had precipitated Russia’s reaction.

According to him, the continent cannot discuss the role of the Pan-African Parliament without placing significant emphasis on the African Union (AU).

The Pan-African Parliament was established as part of the ambitious plan to unify the continent and to integrate the continent not just economically, culturally and socially, but also politically, Mr Rawlings said.

He said the Pan-African Parliament had undeniably played a significant role in establishing various protocols of the African Union, thereby enhancing the AU’s relevance.

The Parliament has also offered significant support towards strengthening legislatures across the continent, and those structures were crucial to the eventual integration of the continent.

Mr Rawlings said notable among the roles of the African Union Parliament was the monitoring of elections across the continent.

“Your declaration of the August 2013 election in Zimbabwe as free and fair is commendable, although others sought to denigrate the process," he added.

According to him, after 10 years in existence, there are questions about the autonomy of the Parliament and its lack of legislative powers.