Rawlings’ passion for the environment celebrated 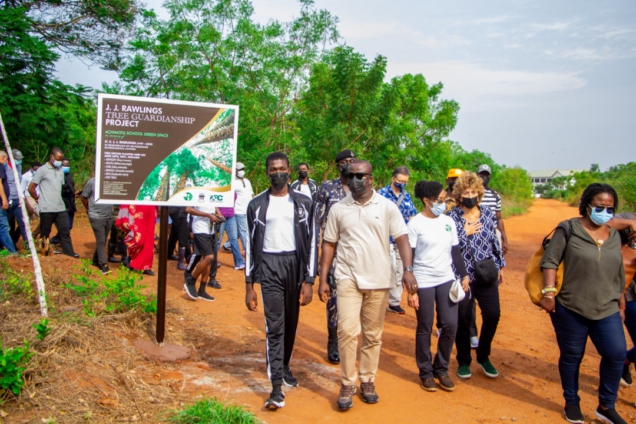 The J.J. Rawlings Foundation in conjunction with the Achimota School and the Forestry Commission, on Saturday held a tree planting exercise in Achimota School to commemorate the 74th birthday of former President Jerry John Rawlings, who died in November last year.

The event was also to recognize the environment credentials of the former President and nurture the spirit of environmental activism in students and the youth.

In attendance were government officials, former political colleagues of the former President, members of the diplomatic corps, old school mates of President Rawlings, friends and members of the general public who all took the opportunity to plant hundreds of trees.

The tree-planting exercise was preceded by a short ceremony addressed by the Minister for Lands and Natural Resources, the Headmistress of Achimota School and a Director of the J.J. Rawlings Foundation. There was also an impressive parade by the Achimota School Cadet.

Ms. Yaa Asantewaa Agyeman-Rawlings who spoke on behalf of the Foundation, said President Rawlings was very passionate and emotional about the environment. She recalled how during the family’s frequent drives out of Accra in the 1980s, the former President will without fail stop the convoy and attend to bush fires with his security detail.

“Other occasions, he would stop the vehicle to allow a snake to safely cross the road. He simply was at odds with anybody who could not appreciate the spirituality of mother nature and the serenity she provided to our lives in exchange for preserving and protecting her. He was indeed a true guardian of our environment,” Ms. Yaa Asantewaa said.

The Director of J.J. Rawlings Foundation also unveiled the Tree-Guardianship Project to “nurture instinctive environmental activism in students” to ensure they understand their role as protectors of the environment, something they should view “as an intricate part of their lives”.

Ms. Agyeman-Rawlings said the Foundation was excited by the participation of Achimota School in the tree-guardianship project because it offered an opportunity for students to take ownership of the tree-planting campaign which is being championed by the Ministry of Lands and Natural resources and “fiercely implemented by the Forestry Commission.”

Earlier the Minister of Lands and Natural Resources, John A. Jinapor in his address expressed the commitment of his Ministry to partner the J.J. Rawlings Foundation to protect the giant legacy of former President Jerry John Rawlings.

Minister Jinapor described the former President’s love for the environment as unmatched. He also recalled Flt Lt Rawlings’ love for discipline, stating that a disciplined society is one that protects its ecosystem and its environment.

“The J.J. Rawlings Foundation has chosen a good cause. I assure them of the total and unflinching support for them to be able to embark on this noble and godly cause that they have chosen for themselves as a Foundation,” the Minister stated.

Lamenting the deplorable state of the country’s environment, the Minister described the situation as an untenable one. He said having had the opportunity to fly over the country, literally the entire southern part is degraded.

“There is no river body in southern Ghana which is fit for purpose. The beauty of the country is in its trees, streams and rivers, not high rise buildings. I want to assure the Foundation that this commitment to protect the environment, this commitment to enhance our ecosystem is godly for me; the commitment is total,” Minister Jinapor said.

The Minister later donated an amount of fifty thousand cedis towards the Foundation’s work.

Headmistress of Achimota School, Madam Marjorie Affenyi, described former President Rawlings as an illustrious son of Achimota School who cared deeply not only for the marginalized but also made it his mission to be the voice of the voiceless.

Mrs. Affenyi said the former President was deeply in love with the preservation and protection of the environment, stating that the school owed it a duty to applaud any initiative such as the Greening Ghana Project that is geared towards preserving and protecting the environment. She congratulated the J.J. Rawlings Foundation for the decision to plant trees in Achimota.

The headmistress said: “Years before the world realized the threat of climate change and global warming J.J. Rawlings was leading the charge on environmental preservation, protection as well as adherence to good sanitation practices in Ghana. It is a common knowledge that while in office he invested heavily in our public health systems and ensured the environment was not disturbed in any way. His fight against galamsey, lumbering and other human threat to the environment were relentless to say the least.

“This project is dear to the heart and soul of the school. On behalf of the Board of Governors, school management, staff and students I assure the J.J. Rawlings Foundation of Achimota School’s commitment to ensure the sustenance of the project.

“It is our prayer that the school in collaboration with the Foundation, the Forestry Commission and the Department of Parks and Gardens will work together and in a few years to come will see to the realization of the dream of having a beautiful arboretum befitting the status of His Excellency Jerry John Rawlings.”

DISCLAIMER: The Views, Comments, Opinions, Contributions and Statements made by Readers and Contributors on this platform do not necessarily represent the views or policy of Multimedia Group Limited.
Tags:
Achimota School
Forestry Commission
Rawlings
Tree planting exercise