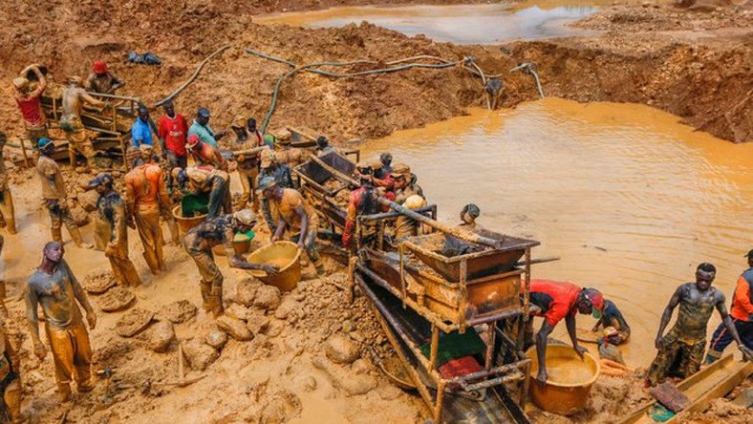 So the evil of illegal mining is revealing to us that even homes, people’s compounds, villages, and farmlands are all sitting on gold, that precious metal listed on international commodity markets.

I have been gobsmacked watching and listening to accounts of farmers, villagers and many individuals over the last few weeks.  As people recount their harrowing experiences with illegal mining operators, popularly known as galamsey, as they dug trenches in their farms and homes to prospect and actually mine that precious metal that has made other nations rich and well-developed.

It is even becoming a reality that some major roads in some parts of the country were constructed on top of gold deposits, possibly unknown to the road contractors who constructed the roads.

A video making the rounds this week must sadden even the hardest of hearts.  According to the video, the main Enchi-Asankragua road, beautifully constructed years ago and at a time, the only beautiful road in the area, is now at the mercy of illegal miners.

The solid road has been desecrated and now caving in with huge cracks, rendering it perilous and deadly to ply on because illegal miners have dug deep under to mine gold.

Yes, galamsey has been very cruel and wicked to our environment and human health.  However, looking at it all, the idiomatic expression that there is a silver lining in every cloud brings out to me some truths about illegal mining.

The truth that though abhorrent and a menace, illegal mining and the extent and pace at which it is going is a revelation that to a large extent, our country is in reality sitting pretty on riches, a pot of gold never imagined by some of us.

The truth is that the rich mineral that nature deposits in Ghana is not only confined to the areas being mined by well-known large-scale mining companies but spreads across.

Whoever christened this country “Gold Coast” at some point in our history must have been a visionary even as far back as pre-independence.  Whether it was a prediction or a reality foreseen, there is no gainsay today that we are completely covered with gold as galamsey has shown so far.

So, did the stark truth then, get lost on us as a nation, at some point?  Is it not sad that over the years, there has been a seemingly slow-focused approach to coordinate the immense national benefits we stood to gain from the widespread gold?

That a focus on another mining industry, bigger than the traditional and known existing mines, would have been the way to go?

Did it have to take the destructive activities of a small number of greedy, selfish illegal miners over time, for a whole nation to rise up to say enough is enough because their activities have brought unprecedented damage to our environment?

Now, the consequences of their damaging activities will permeate generations yet unborn, if we do not arrest the damages now.

So, if the cries of almost the entire society are towering higher and higher each day, and we all seem to be asking for it to be halted, we should also be strategising to exploit the silver linings, the spoils of the galamsey war, and create opportunities for tourism.

I have been thinking about tourism potential as an outcome of the “Stop Galamsey Now” campaign.  If galamsey is successfully banned and the areas of active illegal mining are reclaimed, could we not begin to interest visitors to go and see it?

Imagine we had a demarcated forest reserve somewhere in the middle of those invaded forests well done up and marketed with a rest stop and exhibits of gold.  Imagine a marketer creating ideas including a crazy name like “Forest of Gold”.  Would it not attract visitors to go and see what the Forest of Gold has to offer?

Imagine walking on a purposefully built street paved with gold in a village that was invaded by illegal mining.  Imagine, just let your imagination go wild and picture in your mind’s eye, a five-minute walk, barefooted on “ Gold Street” in village A located in District B.  The feeling would be a true “go and see” photo opportunity.

Many creative marketing ideas could evolve in some of the reclaimed galamsey sites.  Just imagine what stories could be put together in some of those communities and told by tour guides as they take tourists around reclaimed areas.

All these are legacies we can intentionally create out of the aftermath of the atrocious galamsey menace for visitors to ponder over.  We would be generating decent employment in those areas as we seek to build tourist attractions in those communities.

Additionally, the traditional councils and district assemblies would have systematic royalties and taxes to collect.

At the end of the day, we would be seen making good out of an extremely bad, once-upon-a-time situation.

The true fact would be exemplified that Ghana indeed is sitting on gold in every corner of the country.  A real Gold Coast typified in our time.

The writer can be reached via email:vickywirekoandoh@yahoo.com

DISCLAIMER: The Views, Comments, Opinions, Contributions and Statements made by Readers and Contributors on this platform do not necessarily represent the views or policy of Multimedia Group Limited.
Tags:
Coast Coast
Galamsey
Ghana
Illegal mining
Reality zone with Vicky Wireko