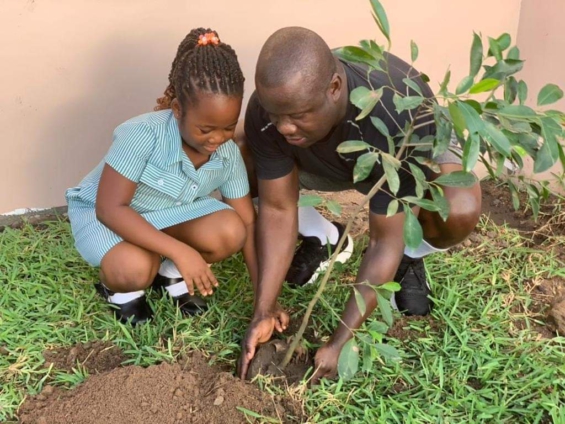 Green as a colour is beautiful, no matter the shade. It connotes freshness and life.

I have a weakness for greens – green clothes, green foods including ‘abunu abunu’ soup, ‘abomu’ and all other green vegetables. I specialise in green lawns with trimmed shrubs or trees, open space gardens, and forest coverage. In short, everything that has a shade of green resonates with me.

I feel heartbroken whenever I see trees being felled to give way for construction of whatever sort, under the guise of development. I was therefore happy that the Minister of Lands and Natural Resources came out, in the midst of all the rumours, to publicly clarify that the Achimota forest in Accra was not being given out for development.

We do not seem to treasure the forest reserves we have or used to have, as one drives out of the capital. I always remember in my active working life when my company had guests from Europe, Switzerland and Holland to be precise, and I had to accompany them by road to the Central and Western Regions to visit two of the Company’s investments in those regions.

Being first-time visitors to Ghana, they were awed at the beautiful forest coverage this country had.  Their constant refrain, as we travelled on was that this country would never face hunger.

Last week, precisely May 21 was marked as International Day of the Forests. It brought home to me, the beautiful Green Ghana Project which was impressively launched last year with some dignitaries across the country simultaneously planting trees to mark the start of the project.

News reports indicate that according to the National Investigations Bureau, 85 per cent of the trees planted as part of the Green Ghana project had survived, after a year.

However, a radio discussion programme on climate change effects earlier this week painted as alarming, the poor state of our environment coupled with our poor appreciation of a green environment.

The discussion was centred on the perennial floods in Accra even before we got into the peak of the rainy season.

It was quite an insightful discussion by the expert panellists. Sadly to note, it was pointed out that in Accra for example, we have lost nearly 80 per cent of the green belt we used to have as a capital.

The indiscriminate cutting down of trees to build and ignoring to plant a tree or two to give shade and protection is something I would call a crime against humanity in view of the related perennial flooding, year after year. The regrettable result has been a loss of lives and properties and the dislodging of families and businesses.

As we build our homes, we have paved our compounds with concrete blocks and or tiles with no green grassing to absorb water when it rains.

One travels and venerates how some cities and towns outside the country have been built, deliberately, most of the time, with trees and shrubs in the midst of communities to enhance the beauty of their environment.  We like the medians along their roads and streets, beautifully greened with shrubs and flowers and maintained with pride.

Regrettably, that culture is lost on us even though we have the capacity to do exceedingly above some of them. Though pockets of greens are seen around some of our public buildings, some roundabouts and the medians along some ceremonial roads and streets, they have been left overgrown with weeds.

In some areas, hawkers and beggars have taken over trampling over grass and shrubs intentionally grown for beautification. Unfortunately, the Assemblies look on for such habits to fester.

In some communities, these same Assemblies have watched on for animals like goats, cattle and sometimes even cows to roam about as they make meals out of the greens purposely created for beautification.

Today, climate change is becoming uncomfortably real and the need to grow trees and other greens as protection has become even more meaningful lately.

That is why a social media campaign I came across the other day appeals so much to me.

The campaign makes a meaningful appeal for us to consciously green our surroundings and communities. The appeal urges one to consider, when fruits are in season, to begin to save the seeds of fruits one eats and help populate their trees by throwing them out along the road as one travels around the country.

Currently, assorted mangoes and avocado pears are in season. What a stunning idea it would be if we all kept our mango and avocado seeds and cast them out whenever we moved out on the road.

In no time, the seeds will grow into trees, bear fruits and produce food for humans as well as animals in the wild. This seems to me like a simple way to help sustain the Green Ghana project.

A proposal worth considering, right?

The writer can be contacted via email via vickywirekoandoh@yahoo.com