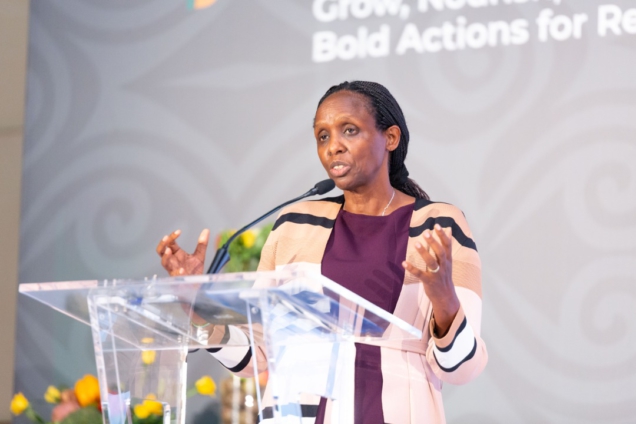 President of the Alliance for a Green Revolution in Africa (AGRA) Dr. Agnes Kalibata

A report evaluating the work of the Alliance for a Green Revolution in Africa (AGRA) in Ghana has commended the organization for its contribution to improving agriculture in the country.

The report by US-based data science company Mathematica, assessed the impact of AGRA’s Partnership for Inclusive Agricultural Transformation in Africa (PIATA) initiative. It concluded that the public policy environment for agricultural development has been enhanced as a result of AGRA’s work. It added that there have been improvements in the availability of agricultural extension services to farmers and enhanced access to inputs due to AGRA’s work.

The rice consortium has also enjoyed some successes with partners increasing the number of mills and aggregators under their belt.  “When it comes to rice, the number of rice mills has increased from 12 to 27, the number of aggregators increased from 31 to 110, and farmer reach has increased by 97 percent. Two seed companies, Sparkx and Volta City Farms, have increased their seed production by 44 percent within 2 years… The number of (rice) aggregators who are getting produce from farmers to processors has increased by 67 percent,” it added. The study further noted that public and private authorities appear to be taking ownership of the consortia’s vital coordination function in Ghana. “The success of Yedent and Advans in Ghana and Luteari in Mozambique can provide insight into how to structure business-led consortia in the future,” it said.

Improvement in extension services and increase in yields

The researchers reported notable improvements in the provision of extension services and farmers’ access to markets because of AGRA’s work in Ghana. “AGRA-targeted farmers in Ghana reported higher rates of engagement with extension agents in the past year, although it is worth noting that the overall rates of access to extension remained relatively low in the country. These farmers also consistently reported that the distance to the nearest agro-dealer had reduced,” the report said.

AGRA was found to be successful in accelerating policy reforms and increasing stakeholder participation in policymaking. The study says through AGRA’s direct support and provision of technical resources to the government, a number of agriculture policy reforms were initiated in the country in seed, fertilizer, and output market access. AGRA provided financial and technical support, as well as encouraged and incentivized non-state actors to participate in the policymaking process. The report observed that reforms in Ghana focusing on modernizing and streamlining policies on subsidies, input markets, output markets, and trade policy are yielding results. The report further noted that AGRA-supported micro-policy reforms have the potential to stimulate private sector investment.

By investing in agro-dealers and seed companies, AGRA was found to have increased farmers’ access to quality inputs. AGRA grants funded agriculture training and business development services for seed companies and agro-dealers, as well as networking between input suppliers, village-based agents (VBAs), and farmers. Stakeholders interviewed by the researchers commended AGRA for investing over $3.4 million in Ghana’s extension networks from 2017 to 2021, and for using various other channels to provide financial support to farmers. “In Tanzania and Ghana, AGRA also helped farmers linked to consortia access loans and extended finance to SMEs through revolving funds and blended finance,” the report observed.

AGRA hailed as an impactful institution

The government of Ghana stakeholders who spoke to Mathematica’s researchers described AGRA’s support as high-quality and credible, mentioning that the organization is well-known, well-connected, and able to leverage relationships with the government to support policy reforms. AGRA was also commended for helping design and monitor the implementation of the country’s flagship agricultural program, the Planting for Food and Jobs (PFJ) initiative. Additionally, AGRA was found to have helped increase civil society’s role in advocacy and policymaking, although deeper engagement is possible.

AGRA’s grantees and non-grantee partners commended the organization for its role in improving the policy environment in the country. AGRA was further hailed for maintaining a strong focus on women and youth in its partnership work. Overall, the interviewed stakeholders felt that AGRA was successful in leveraging private sector investment, assigning AGRA a small-to-moderate contribution to an overall positive trend in private investment in agriculture over the past five years.

According to most of the interviewees, AGRA has the right solutions for seed sector challenges and that the organization is doing well in delivering improved seeds to farmers. Private and public actors alike praised AGRA’s investment in the private commercialization of certified seeds, which gives private actors healthy incentives to grow without encouraging dependence. The report noted that AGRA has been instrumental in ensuring that seed companies have good training to better support farmers. The support to seed companies – including through the purchase of equipment and development of critical infrastructure – was especially recognized for accelerating the reach to growers.

As part of its recommendations, the study prescribed a diversification of AGRA’s seed sector investments from a specific set of grains – notably maize and rice – to legumes, tubers, fruits, and other high-nutrition crops.

DISCLAIMER: The Views, Comments, Opinions, Contributions and Statements made by Readers and Contributors on this platform do not necessarily represent the views or policy of Multimedia Group Limited.
Tags:
AGRA
Josma Company