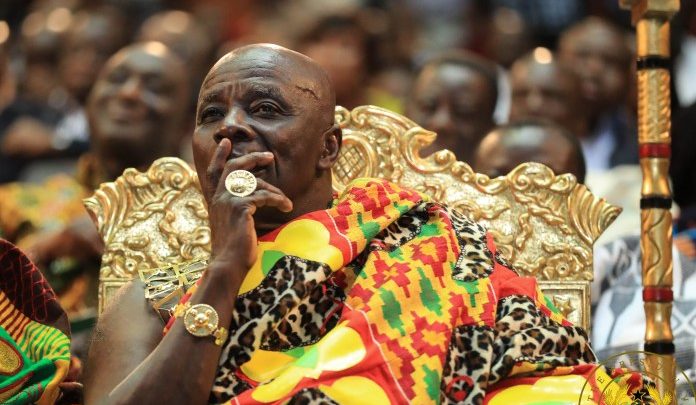 They say the chief’s recent outburst against critics of President Akufo-Addo is unfortunate and ill informed, with some adding that he lacks appreciation of how tough things are in the country.

Speaking at the inauguration of the Kyebi Archdeaconry on Sunday, October 23, the Okyehene said Ghanaians who have been insulting President Akufo-Addo over the economic hardships are uncivilised, witches and not well nurtured.

He remarked that those who have failed to recognise the contributions of the president are children of illiterates.

“Unless you are a descendant of a villager or have not been brought up well, you will not disrespect the President.”

“We should appreciate him for his efforts; we should protect him. As for the insults, it’s for children of illiterates. If you are trained properly, you won’t do that, unless you are a witch or wizard,” Osagyefo Amoatia Ofori Panin said.

This did not sit well with many who woke up to the comments on Monday.

While some criticised him for being tribalistic and partisan, others noted that he was only being populist through his “unfair attacks” on people who are only expressing their frustrations at the government and the president, while another group yet, maintained that he was right to speak as he did.

Below are some of their reactions:

Oh so this is what he said and others are trying to find problem for him. He said nothing wrong. He is an Elder and he will definitely not support young ones to insult elders. Perhaps, it is part of the Ghanaian culture not to insult elders.

Lmao 😂. What he said is not wrong though. our parents say the same things everyday. “You don’t insult elders” is basically what he said

It is you and your family that are”a descendant of a villager” how can a paramount chief talk like a veranda boy.

You sat here and the NPP called former President incompetent and all sort of names we didn’t hear this from you but when it came to them, we’re hearing things like this from elders like you. Looks as if these criticisms are really getting to these “incompetent” men.

The genesis of our problem is, we are
trained to always respect the views of the elderly even when it does not make sense so this man will lower his standards and insult critics without expecting any comebacks from them because he thinks he’s the one that feeds them🙄 #JoySMS

Another problem we have in our culture as Ghanaians is to watch elderly people misbehave and tell us we cannot correct them.
Our culture suppresses people who speak truth to power and we think everything is okay.
Ghana’s outdated culture is one of the big reasons we are here.

Clearly the man did not condemn criticism of the president. From this clip he’s talking about insulting your president who’s elderly. If this’ indeed all he said then I don’t understand the backlash. #JoySMS

He’s a major beneficiary … in Akufo Addo’s government. How did he become a chief beats my imagination.

He wasn’t brought up well himself. Otherwise he wouldn’t have kept quiet wen the president increased his salary by almost 70%, and hire a private jet EXPENSIVELY whilst hospitals don’t have beds. How are our leaders respecting us for us to learn, or respect shud be unrequited ???

Ghanaian adults hate being insulted by youths but really never give enough reasons why they shouldn’t be cussed.

No wonder there’s no progress in the country with such 1364 mind as leaders and heads. As3m Wei so papa panyin mu a ka.

… Was this not the same chief who organized a demonstration against Prez Mahama and today wants Ghanaians to keep quiet when the country has been run aground by his tribesmen? 🤮🤮

He should keep if got nothing sensible to say . You are all part of the problem we are facing. You hate the truth
I wonder which kind people we call leaders n chiefs in our country

If you were also brought up well you will not insult Ghanaians , now we start to insult because you insulted us first . Demon

Most of the population are descended from villagers. Granddaddy this elitism is not giving what you think it is #galamsey https://t.co/de5CWsEOqV

I’m from the Akyem region, and this man here hasn’t done foko to stop galamsey but he’s here saying people who are not happy with President’s governance are villagers. Such a shame that we have these people as our leaders. https://t.co/fqfwtIUHiD

Is every Ghanaian not a descendant of a villager? Confused https://t.co/2iq0d3XA5p

I can’t believe the people clapping and cheering him on……herh… https://t.co/A6moPIN958

Our only crime for this kinda name calling is telling people we voted for and pay to do their job. Sigh! https://t.co/FeAq8MkCxP

when did villager even become an insult here? https://t.co/cuWfqXu9ca

How did we even reach here? They are calling us wizards and villagers for expressing our disappointment in this Govt ? Life ankasa is not fair. Smh! The right time will surely come.#JoySMS https://t.co/O0nfQj63JK

There is actually no shame in being a descendant of a villager. It’s better than being descendants if greedy, selfish politicians who rob the country at every turn and display nonchalance to the plight of the people they swore to serve. Respect is earned not given to undeserving https://t.co/PF08RnBemT

As for this tag of our criticism of the government as being witches/wizards de333 am a proud member. We will not stop talking until things get better https://t.co/LTy2zU8z49

No one is disrespecting, people are just stating facts about his government, mind you those facts could’ve been songs of praises too, sadly its a bad song for him. Get the different https://t.co/3memRfvAK3

Lol. Is he not a chief of a village? Anaa Okyeman, e be city? https://t.co/RWV9WWLc1k

So called elders so obsessed with respect they’ve not earned but want to enjoy. https://t.co/yq56igGpNt

The irony is that this man calls himself an environmentalist but his lands are the most ravaged by galamsey and illegal tree felling in this country. He really should sit this one out https://t.co/QMXPvZZwBA

Is he not a chief for the Villagers? Do Chiefs normally insult their subjects? @#joysms @Joy997FM https://t.co/xfVm2upRih

DISCLAIMER: The Views, Comments, Opinions, Contributions and Statements made by Readers and Contributors on this platform do not necessarily represent the views or policy of Multimedia Group Limited.
Tags:
Okyehene
Osagyefo Amoatia Ofori Panin
Social Media
Social Media Reactions