‘Restrict your movements to safe areas’ – Ghanaians in SA advised 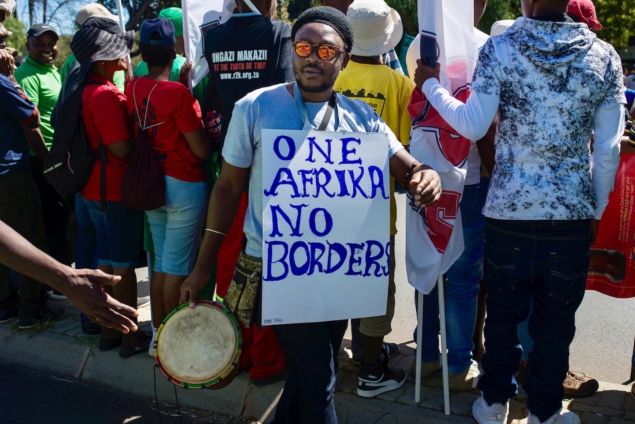 March 28, 2017. Hundreds of protesters can be seen marching through the streets of Johannesburg demanding an end to the recent xenophobic violence against immigrants. The protesters marched from Pieter Roos Park to the Library Gardens in Johannesburg demanding that the South African government do more to help immigrants against violence in South Africa. Picture: IHSAAN HAFFEJEE

The Ghana High Commission in South Africa has advised Ghanaians living in the country to be cautious of their movement.

The Commission said there is a potential danger of upcoming protests against foreigners in the country.

This, it says, has been broadcast by some groups in the country.

Even though it admits, it is not a state policy, it has a greater potential of degenerating into violence.

“Whilst recognising that this is not a government or state policy, such activities by individuals or groups could degenerate into violence aimed at foreigners or threaten their lives, safety and livelihood,” a statement issued on Tuesday, September 6 said.

It has also asked Ghanaians in South Africa to avoid mass gatherings.

“The Mission would, thus, like to advise the members of the Ghanaian community to be vigilant to such incidents, restrict their movements to safe areas, avoid mass gatherings, and refrain from activities that could result in conflict, brawls, or deterioration in their safety,” a portion of the statement added.

Meanwhile, it has asked members of the Ghanaian community to contact the Mission for further assistance when needed.

“Members of the Ghanaian community may contact the Mission in the case of emergency or any attacks,” the statement concluded.

South Africa has had a recent violent history of xenophobia against Africans.

Other African nationals have been scapegoated and blamed for economic insecurity, crimes, and government failures.

They have been targets of nationwide protests and shutdowns characterised by mob violence, looting, and torching of their businesses.

DISCLAIMER: The Views, Comments, Opinions, Contributions and Statements made by Readers and Contributors on this platform do not necessarily represent the views or policy of Multimedia Group Limited.
Tags:
Ghanaians
High Commission in South Africa
South Africa
Xenophobic Attack