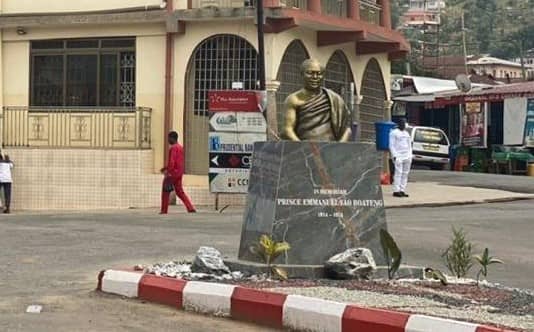 The family of the late Prince Nana Boateng has served notice it will not hesitate to apply the various remedial options in law to deal with New Juaben South Municipal Assembly for revoking a permit for the erection of a bust in honour of the deceased member of the New Juaben Royal Family.

Prince Yao Boateng was a son of Nana Kwaku Boateng I, who reigned as Omanhene of New Juaben from 1913 to 1930.

He was the Ahenemahene of New Juaben, a stool he occupied until he passed away in 1974.

A permit to have a bust constructed in Koforidua in his honour was revoked, allegedly under instructions from the Paramount Chief of Juaben, Daasebre Prof Emeritus Oti Boateng, leading to the demolition of the bust.

The family describes the move as one done in bad faith to satisfy the whims and caprices of Daasebre Oti Boateng.

A statement by Osarfo Adu Amankwa and Co., solicitors for the family issued on June 22, 2021, said “We write for and on behalf of our Clients Prince Nana Kwaku Boateng and Ahenenananom. Our Clients instruct us to acknowledge receipt of your letter dated 12th May 2021 with reference number SA/124/01B on the above subject.

Again, our instruction is to refer you to paragraph 4 of your letter of revocation and to state that your office lacks candour in stating that the permit granted to our Clients was executed without the knowledge of the Assembly. Your office is in the full knowledge that the permit was executed at the direction and under the instruction of an Engineer at the Assembly. The project was completed to the notice of the general public and without any restriction from your office. It is therefore untrue for such a statement to be made in your letter of revocation.”

The statement continued: “Our Clients have cited a letter from the New Juaben Traditional Council to your office which letter contained the fact that the Traditional Council demolished the bust/statue and assigned to itself the duty of name and erecting statues/bust at public spaces contrary to law. Our Clients assert that the revocation of their permit to beautify and erect the bust/statue of Prince Emmanuel Yao Boateng at Prince Boateng roundabout, after the project has been completed was accentuated by the unlawful conduct of the Traditional Council. Your office has acted in bad faith since no prior notice was given to our clients.

“We have advised our clients on the various remedial options in law available to them and we shall take immediate steps as soon as our Clients instruct us.”

The New Juaben South Municipal Assembly revoked a permit issued earlier for the beautification and erection of a bust at Prince Boateng roundabout in Koforidua after the traditional council was accused of illegally destroying the statue.

Daasebre Prof. Oti Boateng together with the New Juaben traditional council pulled down the bust following several threats to do so.

According to the Traditional council, the statue was erected by children of the late royal without the permission of Daasebre Prof. Emeritus Oti Boateng – Omanhene of New Juaben Traditional Council.

The Council described the action by the family as gross disrespect to the Yiadom Hwedie stool and the statue as an “offensive and dirty trick.”

Stating the reason for the revocation, the New Juaben South Municipal Assembly said it is to safeguard the peace and security in the Municipality.

Meanwhile, Daasebre Oti Boateng has been dragged to court by the Prince Boateng family for failing to replace the statue he destroyed a few months ago