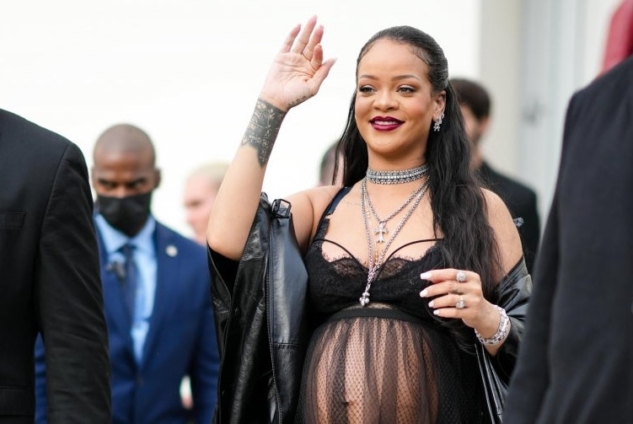 Rihanna may have more good news to share with her fans in the coming days.

The singer, who is currently expecting her first child with A$AP Rocky, has sparked speculation that she has gotten engaged to her boyfriend.

The rumours started to swirl after the Barbadian beauty flashed a huge diamond ring while she was spotted out on Monday, March 21 in Los Angeles.

Stepping out to shop for baby clothes at Kitson, the 34-year-old star rocked a gold band with a massive round diamond on her ring finger.

The Fenty Beauty owner also donned a black Grave Digger T-shirt that gave a peek at her baby bump, teamed with a pair of low-rise jeans, furry stilettos and a maroon-and-yellow trucker hat that read, “Sex is safer than smoking.”

She accessorised with gold earrings, necklaces and bangle bracelets and had a small grey Gucci handbag hung over her shoulder, while her brunette locks were down in natural waves. She also rocked red nails.

Meanwhile, over on her Instagram page, Rih continued to document her pregnancy. On Sunday, the Grammy Award-winning artist took to her Story to share a clip of her flaunting her growing belly.

Prior to this, Rih started a buzz about her baby’s gender after she was spotted shopping at Target. While picking up some items for her yet-to-be-born baby, the “Diamonds” hitmaker was caught holding a cute orange dress that she reportedly placed in her shopping cart, prompting speculation that she may be expecting a baby girl.

Of her maternity style, Rihanna recently described her daring pregnancy looks as “rebellious,” as she has vowed to never buy maternity clothes. “It’s been me personally saying, I’m not going to buy maternity clothes,” she said at her brand Fenty Beauty’s launch at ULTA Beauty in Los Angeles. “I’m not gonna buy maternity pants, jeans, dresses, or [do] whatever society told me to do before.”

“When I saw women dress during their pregnancy [in the past], I’d think that that was the only way,” she further explained. “So I challenged myself to push it further and really just have fun with [maternity style]. Because there’s nothing more fun than a challenge for me. Like, that’s where I get creative. That’s where I’m forced to come up with new ideas and new ways to make it work.”