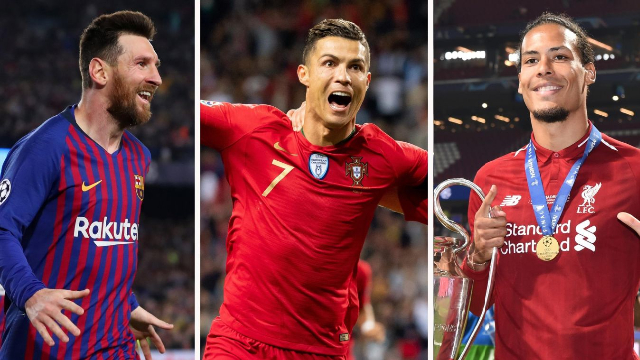 The 10-man shortlist for The Best FIFA Men’s Player award has been announced with Cristiano Ronaldo and Lionel Messi included among the list of nominees.

Virgil van Dijk, Mohamed Salah and Sadio Mane are all included after the Reds lifted their sixth European Cup last season, while there is further Premier League representation in the form of Tottenham striker Harry Kane.

Eden Hazard and Kylian Mbappe complete the shortlist compiled by a panel of experts in men’s football for their achievements during the past 12 months.

The winner will be decided based on a fans’ vote, which is equally weighted alongside the votes of other key members of the footballing community, with an announcement on September 23 at The Best FIFA Football Awards show in Milan.

Eurosport takes a closer look at the candidates….

In his first season with Juventus following his £99million move from Real Madrid, Ronaldo scored 21 Serie A goals as La Vecchia Signora secured an eighth successive domestic title. Ronaldo also helped his country to the UEFA Nations League finals, where Portugal were crowned champions of the inaugural competition.

Ronaldo was top goalscorer for his new club in all competitions with 28 goals in total and he was named Serie A’s Most Valuable Player.

What a year it proved to be for De Jong with the 22-year-old midfielder earning a £67m move to Barcelona off the back of a highly successful season with Ajax.

De Jong was named Eredivisie Player of the Season, and he consistently demonstrated maturity beyond his years as he helped Ajax to a domestic league and cup double and was instrumental in taking Erik ten Hag’s men to the last four of the Champions League.

The bedrock of the all-conquering Ajax team, De Ligt joined De Jong in earning a big-money summer move after his superb displays propelled him into the position of being the most sought-after centre-backs in European football.

The 19-year-old was named in the Eredivise and UEFA Champions League squads of the season after helping Ajax to domestic glory, while he also helped the Netherlands reach the Nations League final.

De Ligt was linked with a host of clubs before opting to join Ronaldo at Juventus in a £67.5m deal.

Kane continued to underlined his credentials as one of Europe’s most deadly strikers as he shook of his August curse to hit 17 Premier League goals despite missing three months of the season with an ankle injury.

With 27 strikes across 49 appearances for club and country, there was no post-World Cup Golden Boot blues for Kane, who guided Tottenham to the Champions League final and also played his part in helping England reach the UEFA Nations League Final.

All still remains blissful in the Garden of Eden, if you ignore the reports that he has returned to Real Madrid a stone overweight.

The Belgian finally got his move away from Chelsea after helping the Blues win the Europa League as the club’s top goalscorer with 21 goals acorss all competitions.

The exciting playmaker was named PFA Fans’ Player of the Year, and Chelsea’s loss is most certainly Madrid’s gain.

What a season it was for the Senegalese forward, who took his game to the next level, often overshadowing the more-feted Mohamed Salah with his displays as Liverpool came within two points of the Premier League title.

Mane was crowned joint Premier League top scorer for the 2018/19 season with 22 goals, and he also starred in helping Liverpool lift the Champions League in Madrid.

The former Southampton man, who scored 30 goals across 57 games for club and country, didn’t end there as he helped Senegal reach the Africa Cup of Nations final, where Algeria prevailed in Cairo.

What more is there left to say about Mbappe, the poster boy of Fren ch football, who enhanced his reputation further after helping his country to 2018 World Cup glory.

Not satisfied with revelling in that triumph in Russia, Mbappe left his teenage years behind him with another stunning season for Paris Saint-Germain, scoring a remarkable 33 Ligue 1 goals in just 29 games.

The 20-year-old helped PSG win yet another domestic title as well as the Trophee des Champions, and it was of little surprise when he was crowned Ligue 1’s Player of the Year.

Lionel Messi claimed the European Golden Shoe as the continent’s top goalscorer with the legendary Argentine notching 36 goals in La Liga as Barcelona left their title rivals behind them once again.

After another arduous campaign, Messi could only help Argentina to bronze at 2019 Copa America as another international trophy eluded him.

After Egypt’s shock Africa Cup of Nations exit at the hands of South Africa, it is easy to overlook what a season Salah had for Liverpool.

It would always prove difficult for the forward to emulate his 44 goals in all competitions from his debut season under Jurgen Klopp, but as a marked man, he still managed to end the season as the Premier League’s joint-top scorer with 22 strikes.

Salah also scored the opening goal from the penalty spot as Liverpool lifted the Champions League with a 2-0 win over Tottenham (below).

Van Dijk was the darling of the British media after mediocre defending served to elevate routine acts of solid body-positioning, but there were more often moments of sheer class that makes the Dutchman a shoe-in for the shortlist and the favourite for the award in many people’s eyes.

A Rolls-Royce of a defender in an era where the art of defending has been dragged through the mud, Van Dijk is both a throwback and a bastion for the modern game, imperious in both boxes and an all-round fine specimen of a man.

The former Southampton defender helped the Netherlands to the UEFA Nations League final, scooped a Champions League winners’ medal, was named PFA Players’ Player and Premier League Player of the Year. And did I mention, he’s a fine specimen of a man.