Russia's flagship carrier Aeroflot is fighting a legal battle with several of its female flight attendants who say it favours slim and attractive cabin crew.

She plans to appeal and is backed by a top Russian human rights and trade union official, Boris Kravchenko.

The company argues that every extra kilogram of weight forces Aeroflot to spend more on fuel.

Staff have to meet a minimum height requirement because they need to store hand luggage in the overhead lockers, Aeroflot says.

The court will soon consider a similar claim from another Aeroflot flight attendant, Yevgenia Magurina.

"A heavy physical build makes it harder for a flight attendant to move around the cabin and provide a smooth service for the passenger," an Aeroflot official told the court. 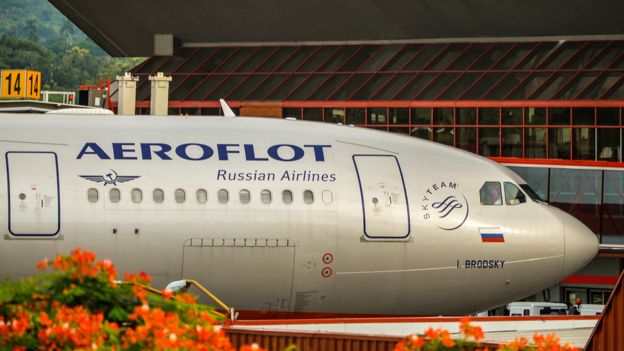 "One's first impression of Russia, and attitude towards Russia depends on the stewardesses' appearance and customer service."

It beat strong competition for the accolade from Russian business giants like Gazprom, Sberbank and Rosneft.

A Brand Finance report on Russia said Aeroflot "has the youngest fleet of any major airline and is investing heavily in marketing promotion, particularly in Asia".

Aeroflot has improved its customer service since the Soviet period when it was often the butt of jokes about grumpy stewardesses and unappetising food.

But Boris Kravchenko called Ms Ierusalimskaya's case "an unprecedented case of sex discrimination". He is a member of President Vladimir Putin's Council for Human Rights and chairs the Russian Labour Confederation.

"The trade unions in this sector have teeth," he said, warning of possible strike action "if such discriminatory behaviour persists". He was speaking to Russia's RBC news website.

In court, the Aeroflot representative said every extra kilogram of weight meant spending an extra 800 roubles (£11; $14) annually on fuel. 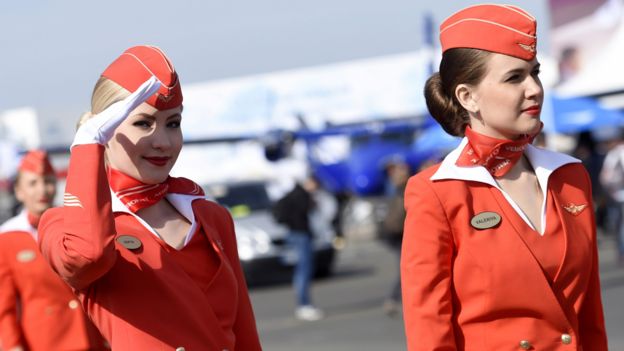 He also said a survey carried out for Aeroflot showed that passengers preferred attractive flight attendants and agreed that an airline had a right to stipulate weight limits and clothes sizes for its staff.

Aeroflot says it has "several hundred" stewardesses aged over 40 on its international routes.

She said the airline had transferred her to domestic flights, cutting her income. She complained that Aeroflot's rules required stewardesses to be at least 160cm (5ft 3ins) tall and have clothes size no larger than 48 (L; 16 in UK; 42 in Germany; 14 in US).

A decorated, veteran Aeroflot pilot, Oleg Smirnov, told BBC Russian that the build of female flight attendants "is an issue for every country's airline".

"Of course a stewardess must be quite elegant, to move between the seats, attend to passengers," he said.

But they also need to be strong enough to handle a heavy inflatable slide in an emergency, he said.

Mikhail Markov, another top pilot, said stewardesses have to be strong enough to lift heavy suitcases quickly. "It's no job for a 43-kilogram girl," he said.