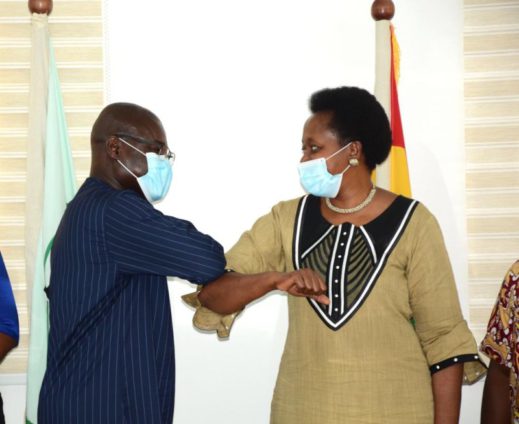 The Rwandan High Commissioner to Ghana, Aisa Kirabo Kacyira has paid a courtesy call on the Director-General (DG) of the Ghana Standards Authority (GSA), Alexander Dodoo, to discuss ways the two agencies can work together efficiently.

The visit was to explore ways the two institutions could implement the policy objectives inherent in the African Continental Free Trade Area (AfCFTA), among other trade-related issues.

The High Commissioner paid the visit to the Authority and was accompanied by the First Secretary and Head of Economic Diplomacy at the Rwandan High Commission, Jackson Ngabonziza.

Dr. Kacyira said Ghana and Rwanda had so much in common, including a stable, democratic and safe environment, which are a bedrock upon which both countries could collaborate effectively.

“Please consider the High Commission as partners and not just diplomats so we can both learn from each other,” she said.

“Rwandans value the help Ghana has given to the country during the time of need and the country has made strides in improving trade with other African countries and we are very glad Ghana is not only hosting the AfCFTA secretariat but is implementing it,” the diplomat noted.

The DG of GSA, on his part, expressed his excitement of a potential partnership and pledged the organisation’s unflinching support in ensuring that the two countries improve their trade relations.

“We will love a bilateral partnership between the two agencies. We will love to institute an exchange programme between the standards institutions of both countries so we can learn from each other,” he noted.

The Ag. Director of Standards at the GSA, Joyce Okoree, revealed that the GSA had been working closely with African Regional Organisation for Standardisation (ARSO) to harmonise some ARSO standards for the successful implementation of the AfCFTA.

The Head of Public Relations of the Authority, Peter Martey Agbeko, in a brief remark said the potential partnership between the two outfits would take GSA to another level and he is looking forward to reconnecting with the people of Rwanda; having been part of a UNAMIR, sponsored team of journalists who paid a working visit to Rwanda in August 1994.

In the coming days, a MoU will be signed by the two organisations to signify the beginning of a formal collaboration. It’s also expected that exchange of personnel will follow for training in their respective countries.

DISCLAIMER: The Views, Comments, Opinions, Contributions and Statements made by Readers and Contributors on this platform do not necessarily represent the views or policy of Multimedia Group Limited.
Tags:
Dr Aisa Kirabo Kacyira
Ghana
Rwanda
Rwandan High Commissioner to Ghana