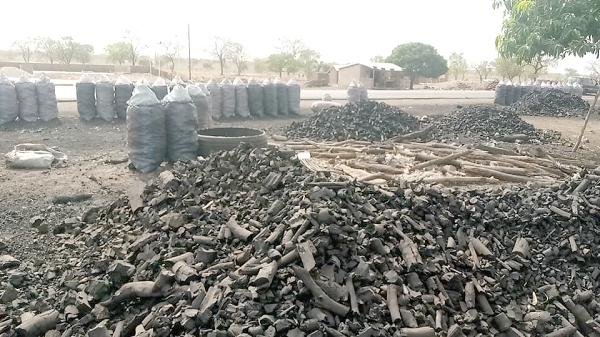 Wulugu, the second largest town in the West Mamprusi Municipality in the North East Region, is noted for its massive charcoal production.

From time immemorial, most residents, particularly women, have engaged in the trade as their main source of livelihood.

On a daily basis, charcoal burners in the surrounding communities and parts of the Mamprugu-Moadugri District supply the commodity to the women.

Most travellers often stop to buy the charcoal for domestic use, while commercial firewood users also troop to the town to load trucks with the commodity to the cities and neighbouring countries, including Burkina Faso.

Currently, a bag of charcoal ranges from GH¢40 to GH¢50, depending on the quality and the type of tree used for the charcoal.

In spite of the devastating impact of the trade on the environment, the women said that was their only source of livelihood.

A charcoal trader, Mankuyi Sandra, said she had been doing the business for the past decade to take care of her family.

“This is the only business I do to feed my family; I don’t have anything doing apart from this. I always buy from the charcoal burners in the villages to sell by the roadside,” she said.

On how much sales she makes from the trade, she indicated; “I used to sell more than 50 bags a day but these days because the charcoal production has reduced, sometimes the whole day I don’t sell even a single bag.”

Another trader, Fuseina Adam, said she had been doing the charcoal business for the past two decades and through that she was able to take care of her children’s education.

She, however, attributed the slow business in recent times to the increasing demand for LPG for domestic purposes.

While most of the people depend on the venture for survival, their activities are also causing massive destruction to the environment.

Some environmental activists have raised concerns about the growing phenomenon, which they say is worsening the climate change situation in the country.

A Climate Change Activist, Alimatu Sagito, in a recent interview called for the introduction of alternative sources of livelihood for the persons who engage in the trade.

Charcoal is a major source of energy in rural areas and to some extent the peri-urban and urban areas.

However, its production causes a devastating impact on the ecosystem.

According to the Centre for International Research (CIFOR), the emission of greenhouse gases from charcoal production is averagely estimated at 71.2 million tonnes of carbon dioxide and 1.3 million tonnes of methane.