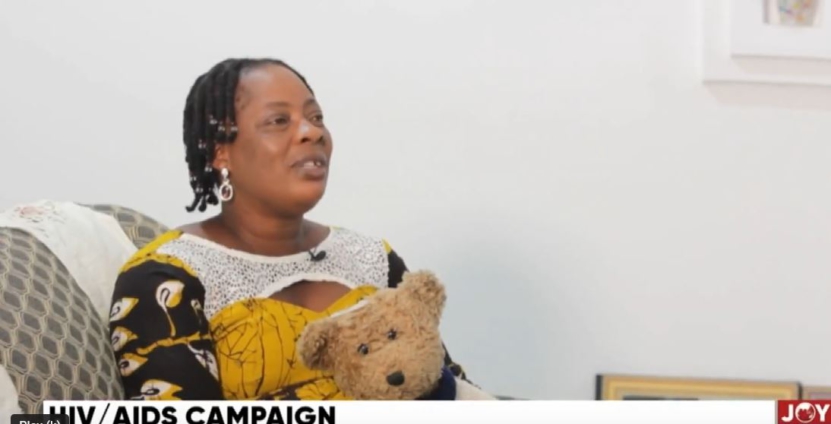 Twenty years ago she began the journey of realising her dream of becoming an officer with one of Ghana’s security agencies.

But that dream was cut short after she was diagnosed with HIV.

Gifty Tokornu was sacked against medical advice and had to face the world all alone with her 9-year-old daughter.

April 16, 2003, will forever be etched in the mind of Gifty Torkornu. She received news that changed the entire course of her life.

The training school in which she was, organised a blood donation exercise. Gifty was part of the few recruits who could not donate. The school then organized a blood sugar test for a select few.

Everyone in that group was discharged except Gifty who was asked to wait at the Director of Training’s office. It was there her world came crashing.

“He just threw it into my face, Gifty I’m sorry to tell you, you have HIV…” Gifty recounted.

“My brother it was like an eclipse of the sun, I couldn’t believe it,” she told me.

Later she chose to confirm her status at the police hospital at cantonments.

Her world became dark. She was utterly devastated.

Against her hopes, she was told of her positive status again. However, the medical doctor advised the training school “not to do anything stupid” indicating “our client was strong and healthy”

Gifty was only 6 weeks away from the graduation which would have seen her start her life as an Officer with one of the security agencies. But that dream never materialized when the security agency informed her that they cannot employ her because of her HIV status. “…order from above said you should go home”

Why? Have I broken any rules or acted contrary to regulations?” she asked.

But the director responded “You’re a recruit listen to me, order from above said you should go home”

And that is how her dream was cut short.

Gifty wanted to be the first woman to drive the heavy trucks of the service. She was so confident of making history and setting the pace for other women in the security service.

The strong stigma and the fear of death consumed her. She then decided to end it all immediately.

Gifty went to training school without the support of her family, and now she had nowhere or no one to turn to.

“Everything has been taken away from me and now calls to disturb my life…So I prepared my own concoction, I took it, but nothing happened”

But after this failed attempt at suicide, her life took another turn. A radio show on HIV on Joy FM will be the trigger for the open disclosure of her status and her new life as an HIV ambassador.

As Gifty tell me, she called into the show to register her displeasure about the negative tone of the conversation. She heard the radio conversation on her way to the popular Obra spot for an event to mark world AIDS day.

It was there she volunteered to disclose her status and talk to the audience upon the request of an official from the Ghana AIDS commission.

Her journey as an ambassador would begin shortly after that.

Gifty since 2010 has dedicated her life to inspiring hope and campaigning against stigma.

She encourages people living with HIV to live and achieve their full potential, especially women.

She’d later find love again in the place she was initially shunned, her church.

“Few weeks after declaring my status in the church my husband then asked me to meet him at the church…when we go there, he said he wanted to marry him. So I asked him, are you crazy?”

“I’m not marrying HIV, I am marrying you,” he responded.

“Yes I wanted to get married but it’s the way he went about it…so I gave it a try and we got married.”

Despite the years of the campaign, Gifty says stigma is still a challenge, especially in the workplace.

She said many companies would not employ her despite her qualification adding, that workplace abuse and stigma is still high.

(4) The HIV status of a person, the partner or close relative of that person shall not constitute a reason to

(a) refuse employment, or

(b) Terminate the employment of that person except where an employer can prove that the requirement of the employment in question is that an must be in a particular state of health or medical or clinical condition.

(5) The relevant standard in an employment-related issue shall be the fitness for work of an employee.

(6) An applicant for employment shall not be tested to ascertain the HIV status of the applicant for the purpose of recruitment, promotion or any other reason

Fortunately for Gifty Torkornu, the work of advocacy together with family support paid her bills.

But since the campaign took a nose dive, Gifty has now turned to poultry and grass-cutter rearing. For her, this enterprise has been fulfilling and rewarding.

Gifty wants the campaign stepped up and for infected people to know that they can live their fullest potential once they stick to the protocols of treatment.

The fight against the HIV/AIDS epidemic is a collective one.

We all must put our shoulders to the wheel, starting from our posture and how we perceive persons living with HIV. Shun the stigma, because stigma kills.

DISCLAIMER: The Views, Comments, Opinions, Contributions and Statements made by Readers and Contributors on this platform do not necessarily represent the views or policy of Multimedia Group Limited.
Tags:
Abuse
HIV/AIDS