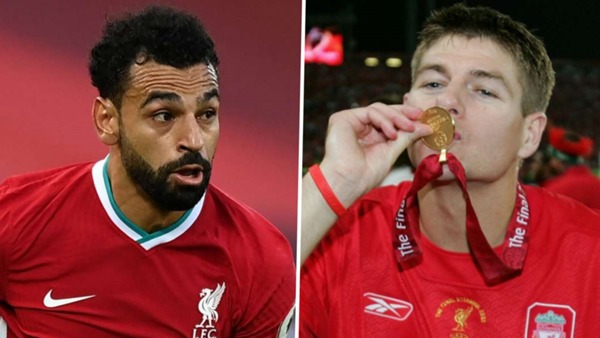 Salah netted a stunning breakaway goal early in the second half against Atalanta as the Reds tore the Serie A side apart in a 5-0 victory.

That strike, a composed left-footed finish at the end of a rapid burst forward, was the Egypt international’s 21st in the Champions League proper for the team. Salah has therefore tied Gerrard’s all-time club benchmark.

Salah, who reached the 2018 final in his first season at Anfield and won the competition the following year, swiftly teed up a fourth Liverpool goal for Sadio Mane.

Diogo Jota had scored twice before the break and completed his hat-trick – his first in Liverpool colours – as Jurgen Klopp’s side moved 5-0 up after just 54 minutes.

That would be the end of the scoring as Jurgen Klopp’s men cruised to a win that saw them win their third straight match in the Champions League group stage.

Liverpool are in pole position to qualify for the knockout phase after going top of Group D, five points clear of Ajax and Atalanta who are both on four.

The five-goal victory on Tuesday means Klopp’s side also set the record for the biggest ever win by an English club away to Italian opposition in European competition.

Jota has impressed for the Reds of late, with the Portugal international only the second player to score on his first two starts in the Champions League for Liverpool, following Robbie Keane back in 2008.

Having also starred for Wolves in the Europa League last term, Jota has now scored three hat-tricks in the Champions League and Europa League combined since the start of last season, the only player to have done so more than once.

He has scored nine goals since the start of last season in European competition – six for Wolves and now three for Liverpool – which is more than any other player for an English side in that period, excluding strikes in qualifying matches.

Following the international break, Liverpool’s next Champions League match will be against Atalanta at Anfield on November 25.