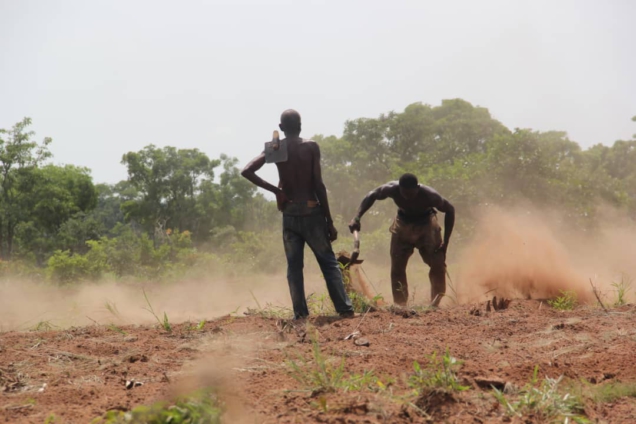 Farmers in northern Ghana are concerned that lack of rains may result in a catastrophic food crisis.

Farmers plough their farmlands as the cropping season begins, but the rains aren’t arriving.

Agricultural Extension agents in Bawku West, Zabzugu, Garu, Jirapa, Saboba, North East Gonja, Sawla Tuna Kalba, Kassena Nankana, and Tempane, among others, are devastated by the situation because they have been waiting far too long for the rains to set in.

They are concerned that the scenario will have an impact on food production this year.

In East Gonja, aside from having to deal with the prolonged periods of drought, farmers are also finding it challenging to embrace climate-smart agricultural methods.

The story in East Mamprusi is not particularly different. The rains came earlier than predicted, and farmers were able to plant their crops before it unexpectedly halted. The farmers have since been waiting for some more rains as they watch their young cereal crops wither on their farms.

“For zones where the rains stopped abruptly, the farmers have been hoping to replant when the rains resumed. Unfortunately, the farmers may have to wait longer, as it is not clear when to expect the rains; Musah Safiatu, an Agric extension Extension worker,” had indicated.

Water bodies on which some small smallholder farmers rely have dried up, exacerbating the problem.

“When the plants were in bloom, the rains came down in torrents, causing the three-month-old sorghum to fall,” says Georgina Sabari, AEA, Kassena Nankana West District.

Madam Sabari states that the rains do not come when they are expected, but rather during the harvesting season.

Madam Sabari and a farmer from the same district, Faustina Banakwoyem, provide a bleak picture of dealing with post-harvest losses during that time.

The weather patterns in Ghana are shifting. Because rain-fed agriculture accounts for a large portion of the country’s agriculture, changes in rainfall patterns have a significant influence.

It is becoming less and less predictable when the rains will start and when they will stop, leaving farmers always racing against time all season long, guess-working when they can plant or harvest their crops on time.

The northern part of the country experiences only one rainy season, which lasts from May to September but even this pattern is no longer guaranteed as rain delays and early cessation have become the norm in recent years.

“This is exactly what we’re experiencing right now. Rain does not arrive on schedule, yet it ends so sooner than expected. As a result, huge crop failures occur,” Konlan Justice, Management Information System officer at Tempane district.

Other districts, such as Nanton, Tolon, Yendi, Kumbungu, Karaga, Mion, Mamprugu Moagduri, Saboba, Tatale-Sanguli, and Builsa South and North, are in the same boat.

In Namumba South, Bongo, Nandom, Sisala West and East districts farmers are praying for rain, but it does not look like there is any hope on the horizon at the moment.

The agony is felt by hundreds of farmers who feed thousands of families because the land is dry, dusty, and barren. This is a troubling trend given that it is the peak growing season.

The causes of this issue are numerous and do not appear to be going away anytime soon.

Climate change has been a major source of worry.

Africa, according to the United Nations, is the continent most vulnerable to the impact of climate change, despite the fact that it accounts for only 4% of global carbon emissions.

Raising public awareness of the suffering of the farmers in these districts would draw attention and aid, but the most vulnerable may not be able to wait much longer as the situation worsens. That is why GASIP’s intervention in the timeframe is commendable.

More than 90 farmers, agriculture extension agents and media practitioners from 36 districts across the five regions of northern Ghana have been speaking about the erratic rainfall patterns in their communities in recent times at the Ghana Agricultural Sector Investment Programme’s (GASIP) “Building Champions in Agribusiness Value Chains for Climate Change Resilience” event in the Savannah regional capital, Damongo.

Principal Meteorologist at the Ghana Meteorological Agency (GMet), Nana Kofi Opoku said the farmers’ concerns will help them examine their forecast in order to provide the best possible information to farmers.

Mr. Opoku notes that GMet would continue to provide farmers with decadal and monthly forecasts to assist them in planning ahead of the season.

He does agree, however, that farmers may not be able to grasp the weather forecast due to the jargon employed, but believes that the usage of the media will benefit farmers greatly.

The technology and management methods developed by GASIP have also arrived at the opportune time. These technologies have been shown to help farmers maintain and increase their output.

In collaboration with the Centre for No Till Agriculture, GASIP has trained these farmers on appropriate land preparation with no or minimum tillage, no burning, use of climate-resilient seeds, appropriate nutrient/fertilizer management, and appropriate planting methods – right spacing, row planting.

The rest include live fencing, fire belt, operation of group charter and no bush burning around the community.

The farmers, Agric Extension Agents and media were practically trained to better understand these technologies and implement them at various districts.

Climate Change Adaptation Manager at GASIP, Dr. Edmund Kyei Akoto-Danso says it is their wish these farmers implement the technologies and encourage their colleagues to adopt to them to mitigate the shattering effects of climate change.

GASIP is funded by the International Fund for Agricultural Development (IFAD) and is being implemented by the Ministry of Food and Agriculture.

DISCLAIMER: The Views, Comments, Opinions, Contributions and Statements made by Readers and Contributors on this platform do not necessarily represent the views or policy of Multimedia Group Limited.
Tags:
agricultural extension
Rains