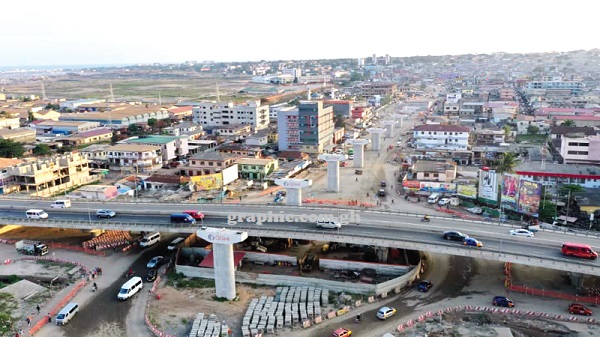 The road from the Obetsebi-Lamptey roundabout to the Central Mosque at Abossey Okai will be temporarily closed to traffic from today to Friday, September 30.

According to the Department of Urban Roads, this is to enable the contractor to launch metallic beams onto the interchange from 10 pm to 5 am each day.

“This is to enable the contractor to launch the metallic steel beams of the interchange. Motorists are advised to follow the traffic diversion signs and use alternative routes to their destinations, where practicable,” a public notice signed by the acting Director of the Department of Urban Roads (DUR), J. O. Amoo-Gottfried, said.

Already, motorists have been restricted to the use of one lane, especially along the roundabout to the Kaneshie Market (Mpamprom) section, due to construction works which are creating a lot of inconvenience for road users.

This is in spite of police presence to control the flow of traffic to ensure order and the smooth movement of vehicles.

The launch of the beams to serve as decks for the road on which the asphaltic concrete will be laid is part of the second phase of the road project.

Construction works on the second phase of the Obetsebi-Lamptey Interchange project began in February last year.

The second phase covers the third tier of work from the interchange towards the Abossey Okai road, as well as underground storm drains from the Hyundai stretch of the roundabout to Mpamprom, near the Kaneshie Market.

This phase of the project involves the construction of a third-tier flyover from the Abossey Okai Central Mosque side of the road towards the ISTC Yard.

It also involves the widening of the road into a three-lane dual carriageway, with provision for bus rapid transit facilities.

It will also see the widening of the Awudome Cemetery and the Nii Teiko Din roads into dual carriage lanes, as well as the improvement of the Kaneshie Market Terminal.

The ground level will have a re-modelled roundabout.

Engineers working on the second phase of the project told the Daily Graphic last month that they were on course to meet the March 2023 completion deadline.

They estimated the current state of the project to be about 64 per cent complete.

The first phase, valued at $35 million and completed in November last year, five months ahead of schedule, involved the construction of the second tier interchange from the Graphic Road towards Kaneshie — east to west.

It also involved the construction of two (5 x 2 metre) 550-metre viaducts and ramps between Graphic Road and the Dr Busia Highway (Kaneshie-Mallam Road).

The construction of the interchange became necessary to eliminate one of the major bottlenecks on the Ring Road in Accra — congestion — and improve traffic flow at the intersection of four major roads — the Graphic Road, the Kaneshie-Mallam Road, Ring Road West towards the Nkrumah Interchange and Ring Road West Extension towards Abossey Okai.

On completion, there will be the erection of an appropriate monument in memory of Emmanuel Odarkwei Obetsebi-Lamptey, one of the Big Six of the country’s independence struggle, after whom the interchange is named.

The Obetsebi-Lamptey Interchange project is being executed by QGMI, with FAS Consult Ltd as a consultant.

The DUR, an agency under the Ministry of Roads and Highways, is responsible for the project.