Security agencies on manhunt for anyone connected with ‘secessionists’ 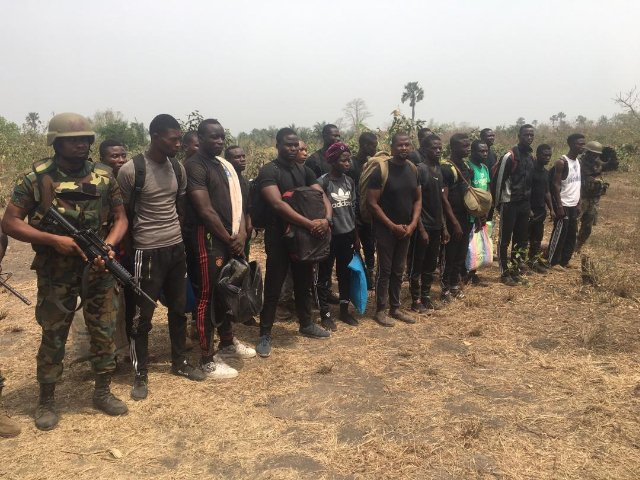 Security agencies are on a manhunt for anyone connected with the Homeland Study Group Foundation demanding an independent Western Togoland from Ghana.

A special operation by the 66 Artillery Regiment of the Ghana Armed Forces rounded up 21 recruits undergoing training at a remote location, 10km North of Volta Region town, Dzodze along Ghana’s border with Togo.

The group was arrested after the military broke up the base suspected to be training ground for troops associated with the secessionist group.

Second-in-Command for the regiment, Major Delali, describing the thickness of the vegetation said: “It affords natural cover. When you are here until somebody enters, the person will not know that there are people there. I cannot tell if they they are skilled or not but these are obviously people who know what they are about.”

He was earlier in May 2019 arrested together with 80 other members of the group allegedly planning to declare independence for Western Togoland.

Nine of them were later charged with conspiracy to commit treason felony, abetment of unlawful training, unlawful assembly and offensive conduct conducive to the breach of peace and put before court. But the charges were dropped.

The 85-year-old leader, however, reannounced secession in December and has since been on the run.

The Ghana Armed Forces says the operation is not yet over.

Information Minister, Kojo Oppong Nkrumah says anyone involved with the group will be arrested and prosecuted.

“The managers of our national security apparatus have been very clear that this sort of behaviour, attempts at secession or training paramilitary groups are in contravention of our country’s laws… the person behind this exercise will be apprehended and dealt with in accordance with the law,” Nkrumah said.

But the head of Institute for Security, Disaster and Emergency Studies, Dr. Ishmael Norman is warning of more such groupings.

“When you arrest a group of them, they become more validated. And because of that, the government must get ready for a much bigger, organised, sophisticated group. They are like that at the initial stages.

“What bothers me is that because of the economic effect that they bring to a community, for the community to be this quiet all this while without reporting on them is worrying,” Dr. Ishmael said.