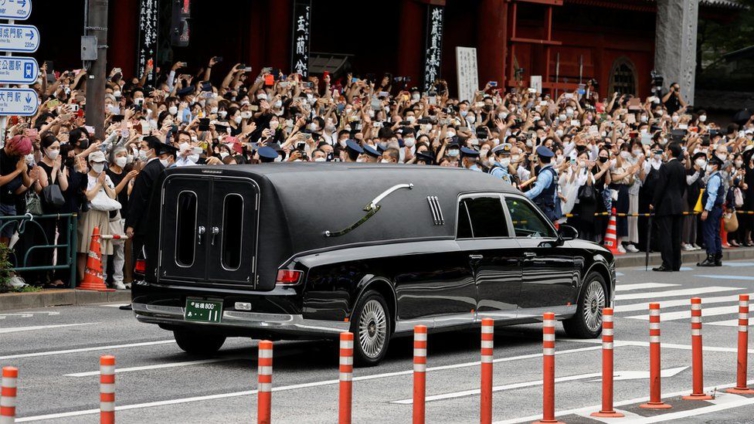 She placed it on a wide altar covered in white chrysanthemums.

Above it hung a huge photo of Abe, Japan’s longest-serving prime minister.

Only once before in Japan’s post-war history has a politician been given a state funeral – and Tuesday’s event to honour Abe has stirred huge controversy.

It drew thousands of guests – local and global leaders, notably from Japan’s closest allies. But it also faced a backlash as protesters marched against the decision to hold the funeral.

It’s a day and an event that appears to have cut Japanese society down the middle. And it’s a sign of Abe’s complicated and often divisive legacy.

The 67-year-old politician was assassinated in July – shot twice by a homemade gun. The killing shocked a country unused to gun crimes or political violence, triggering an outpouring of grief for a leader who had never been that popular.

“Abe-San, thank you so much,” mourners shouted when they gathered to pay their respects in July – with his death, many of his countrymen realised he had given Japan a sense of stability and security.

That mood changed with the announcement of a state funeral. But it has gone ahead despite growing opposition from the Japanese public with opinion polls showing around 60% opposed it.

Outside the Budokan – the arena in Tokyo where the funeral was taking place – the queue of mourners carrying flowers stretched for well over 3km (1.8 miles). They wore black and carried flowers to pay their respects for one last time.

“I love Abe and everything about him, that’s why I am in line,” one 19-year-old said. Another mourner, a woman, said she was there to “show my gratitude for his long service as PM”.

But a short distance away in front of the Japanese parliament thousands more gathered to noisily and angrily demonstrate their opposition.

Abe was widely admired abroad, but he was a divisive figure at home. Many of the protesters outside parliament were furious about the $10.7m (1.6bn yen; £10m) cost of the funeral. Others simply said Abe did not deserve the rare honour of a state funeral.

“I am frustrated and angry that we let the government do whatever they want without consulting the people,” said 25-year-old Iori Fujiwara. “Us younger generation needs to speak out more for our own future, that’s why I am here.”

“I could not stay at home while they are spending so much money and inviting so many guests while there are Japanese people suffering from the typhoon last week,” said 25-year-old Ayaka Uehira.

Many of those who oppose the funeral – and Abe’s political legacy – are older Japanese. In a country traumatised by war, the older generation has long favoured a “pacifist” constitution that has kept Japan from heavily investing in its military.

Abe, however, sought to change that – not by a referendum or parliamentary process, but by reinterpreting the constitution.

This move was controversial and unpopular but has increasingly been welcomed by Abe’s supporters – many of whom are younger Japanese. Untroubled by memories of war, they are also increasingly reacting to China’s aggressive claims on Japanese territory.

For them, Abe was an extraordinary politician who put Japan back on the international map as a significant player.

Prime Minister Fumio Kishida and his Liberal Democratic Party certainly made the decision to honour Abe without considering how the country might react.

But there is no denying the fact that Abe was also a man greatly admired by Japan’s allies.

So it’s no surprise that the US vice-president, and sitting and former Australian prime ministers travelled to Tokyo to pay their respects. Or that India’s PM Narendra Modi made the journey after skipping the funeral of Queen Elizabeth II in London last week.

They perhaps recognise that in some ways, Abe was well ahead of his time.

He had always been wary of a rising threat from China – a concern Japan’s allies now share.