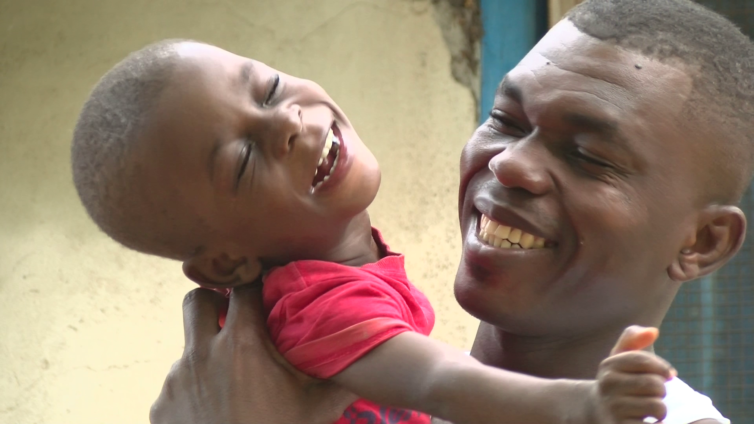 Hearing the cry of a newborn baby in their home is a dream many couples yearn to have. For 30-year-old Martin Edem Asato and his wife, welcoming their first child about four years ago was nothing short of a blessing.

But, a year after their son Martin Junior’s birth, the joy of having their own kid began to dwindle. This was because their son showed some signs that worried them.

“He was not responding. All his muscles are weak. He can’t stand, sit on his own. I took him to the hospital and he was diagnosed of cerebral palsy,” Mr Asato told Joy Prime’s Emmanuel Dzivenu when he visited his home in Mafi Adidome, a community in the Central Tongu District of the Volta Region.

Following the diagnosis, Mr Asato and his wife became worried about the health of their only child.

Coupled with having little to no knowledge of cerebral palsy, they had to deal with their family whose misconceptions about the disease began to have a heavy toll on them, especially Mr Asato’s relationship with his wife.

His wife’s family claimed that he was responsible for the state of their son. They went further to allege that he had bewitched their son.

Soon after the pressure got to her. The single father recounted that everything took a downward turn and eventually his wife abandoned him and the child.

“The mother’s family gave her pressure asking her to find a way of leaving the child. She finally left and I took up the responsibility as the mother and father,” he said.

Martin Junior is four years old and his father is his sole caretaker. “I do everything with the exception of breastfeeding.”

The little boy has a slack neck and stiff muscles which makes movement difficult. He can barely do anything for himself.

Just like any parent who worries about their child, Mr Asato did not settle down to only worry about his son’s diagnosis.

He sought remedies from several health facilities and when that failed him, Mr Asato tried traditional herbalists but to no avail. Soon after the realities of being a single father with a special needs child began to show.

Mr Asato, who is a trained teacher from the University of Education Winneba, quit his job to be the full-time caretaker his son needed.

He said “when I wake up, I do the household duties – sweep and wash. When he (child) wakes up, I bathe him, massage and feed him. After that, we either come out or watch TV.”

But caring for children with cerebral palsy is a day job on its own and can be overwhelming. Martin Junior needs a lot of attention at home and visits the hospital for a medical checkup as well as physiotherapy.

So despite his devotion to his son, Mr Asato needed to earn some money for their survival. His only source of income now is this motorbike that a friend gave him.

He narrated that to put food on the table for his son daily, he leaves him alone indoors for some hours, goes to ride his bike and make money.

It also does not help that they are burdened with ridicule and stigma from their community, leaving the single father with no one to rely on.

But Mr Asato said his love for his son overrides the public mockery and rejection although he acknowledges that it has not been an easy journey.

To keep prying eyes away from his life, the single father has chosen to stay indoors with his son listening to music to drown their misery.

The cause of Cerebral Palsy is unknown but genetic abnormalities, congenital brain, maternal infections, and fatal injuries are associated with the condition.

Although there are no official statistics on the number of children with the disorder, Cerebral Palsy Africa estimates that one child per 300 births has the condition in Ghana.

Mr Asato is wishing for aid to come his way, one that will ease the burden of raising his son alone.

“I need assistance to put up a computer shop close to home and be able to cater for the child as well as train school dropouts,” he said.

But for now, Martin continues to shower love on his son, hoping life smiles at them one day.