Fugitive US whistleblower Edward Snowden's year-long leave to stay in Russia has expired without confirmation that it will be extended.

His lawyer said he could stay in the country while his application for an extension was being processed.

The man who exposed US intelligence practices to the world's media won leave to remain in Moscow a year ago.

Little is known about his activities in Russia – where he is living and whether he is working. 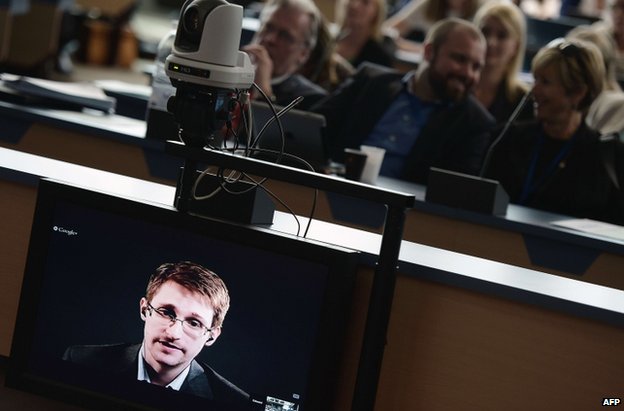 In June, Edward Snowden spoke by video link to a session of the Council of Europe in Strasbourg on improving protection for whistleblowers 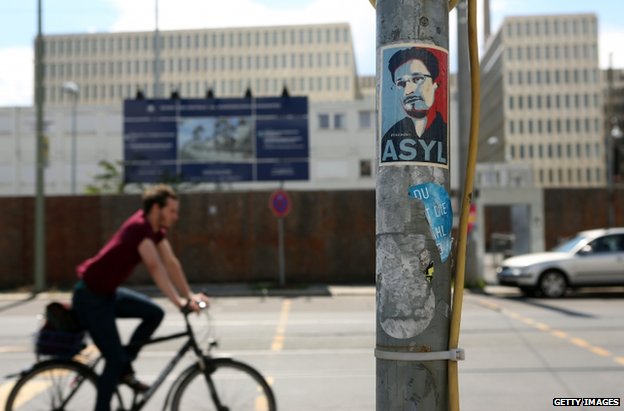 The man who told the NSA's secrets has followers in Germany who would like to see him granted asylum there. This poster was stuck up near the partially finished new headquarters of the Federal Intelligence Service in Berlin

However, he caused a sensation in April when he appeared in a recorded message on President Vladimir Putin's annual televised question-and-answer session to ask if Russia spied on its citizens.

Anatoly Kucherena, the lawyer who acts as his spokesman, stressed in an interview for Russian TV on Thursday that his client had been given "temporary leave to remain" in Russia, not "political asylum".

A US lawyer who has advised Mr Snowden said that he was likely to stay in Russia for the time being.

"I know ultimately he would love to be able to come home or seek refuge in a country of his choice," Jesselyn Radack said in an interview for Australia's ABC Radio on Wednesday.

Speaking at the end of May, US Secretary of State John Kerry urged Mr Snowden to "man up" and return home to face justice.