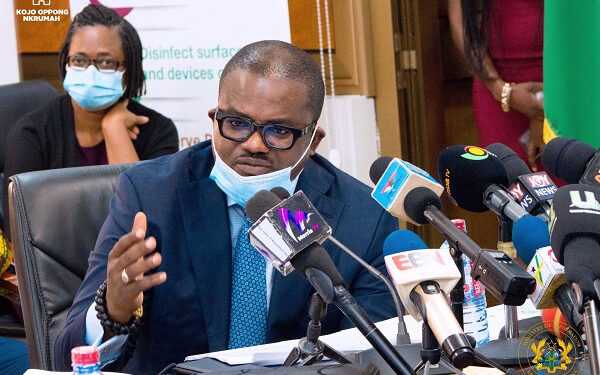 Ghanaians have begun sharing their views regarding the dismissal of Charles Adu Boahen.

The Minister of State in charge of Finance was dismissed hours before the premiere of investigative journalist, Anas Aremeyaw Anas’ latest work ‘Galamsey Economy’.

According to a statement from the Jubilee House, “after being made aware of the allegations levelled against the Minister in the exposé, ‘Galamsey Economy’, the President spoke to Mr Adu Boahen, after which he took the decision to terminate his appointment, and also to refer the matter to the Special Prosecutor for further investigations.”

Director of Communications, Eugene Arhin, said the President thanked Mr Adu Boahen for his services to his government since his appointment in 2017 and wished him well in his future endeavours.

Social media is already awash with reactions since the news broke moments ago.

Find the comments below:

Today promises to be such a long day, a whole lot taking place already. Awaiting the premiere of the exposé this evening, surely another broom to sweep the system small.

So I hear Charles Adu Boahen tendered his resignation but it wasn’t accepted. He was rather dismissed later. Done to save face. Lmaooo

Sacking Charles Adu Boahen is too lenient. He should be jailed so he can atone for his crimes

DISCLAIMER: The Views, Comments, Opinions, Contributions and Statements made by Readers and Contributors on this platform do not necessarily represent the views or policy of Multimedia Group Limited.
Tags:
Charles Adu Boahen
Nana Akufo-Addo
Social Media