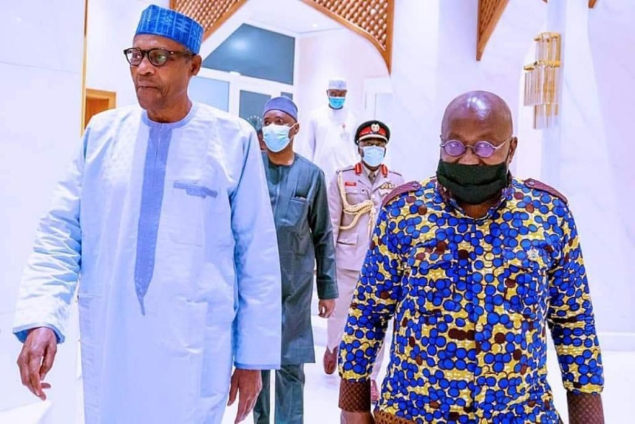 It was anticipated that the Economic Community of West African States (ECOWAS) would be concerned about the recent happenings in its member-state Nigeria.

The regional bloc is already in talks with the Malian authorities in order to stem a possible eruption of chaos since the overthrow of its civilian government by a military junta.

However, the demands of citizens of member-states took a different turn when the #EndSARS protests emerged as the Nigerian youth demand an end to police brutality allegedly perpetrated by the Police’s Special Anti-Robbery Squad (SARS).

Throughout the protests, many African youth have demanded their various leaders to, at least, state their position on the ongoing crisis in the region while accusing President Muhammadu Buhari and his leadership of complicity.

He is yet to publicly address the Nigerian citizens as the development continues to degenerate.

On Tuesday night, the Nigerian military allegedly opened fire on one of the pivot areas for the ongoing mammoth demonstrations, Lekki Toll Gate, injuring many unarmed civilians in the process.

Since what has now been dubbed as the #LekkiMassacre, there are calls on social media for intervention from ECOWAS.

And they continued singing even when they were being killed 💔💔💔 pic.twitter.com/bL1RzLeYSM

They are still shooting this morning!! They are still killing us!
Dj Switch just posted one her Instagram story. How did we end up with these leaders??? #BuhariResignNow pic.twitter.com/Bf3uu62aE8

It had been simmering for a while, but this time, it came up strong in social media trends moments after videos of the violence went viral with many calling on the recently-elected Chairman, President Akufo-Addo to call his colleague leader to order.

They said the silence of the ECOWAS leaders is too loud.

Chairman 🙏🏽 @NAkufoAddo we need your voice heard the loudest and acts to intervene the strongest as President of Ghana and as ECOWAS chair. Thank You #PrayForNigeria

I was sitting my somewhere you said I’m shocked. This one that I’m shocked you won’t say it for me. Ei Agyapa https://t.co/VKQ1JrGJ5n

The government of Nigeria has declared war on its own citizens. The African Union and ECOWAS must call on President Buhari to stop the killing immediately.#EndSARS https://t.co/6sa5e8MVdx

A.U may be silent, ECOWAS may also be silent about the heinous brutality meted by police of Nigeria to the youth, but we in Ghana and around the world join my brothers and sisters in Nigeria to say “ENOUGH IS ENOUGH”!!#EndPoliceBrutalityinNigeraNOW #LekkiMassacre pic.twitter.com/kYnzOGi2KN

Hours later after the incident, President Akufo-Addo tweeted about his excitement with winning the number one spot during balloting for the December elections.

“Number 1 on the ballot. Let’s maintain the first position on December 7, 2020, to do more for Ghanaians. Vote for Akufo-Addo and the NPP. #4More4Nana,” he tweeted on October 21.

Number 1 on the ballot. Let’s maintain the first position on 7th December 2020 to do more for Ghanaians. Vote for Akufo-Addo and the NPP. #4MoreForNana pic.twitter.com/0glqjbfNFV

This comes on the back of balloting conducted by the Electoral Commission on Tuesday.

But some social media users see this as a missed opportunity by President Akufo-Addo to solidarise with the plight of the Nigerian citizenry while questioning the priority placed on their demands as Chairman of the ECOWAS.

This came out yesterday, the day so many people lost their lives. It was in the news. Why this at this time? And here? You saw all our tweets yet tweeted this? Okay https://t.co/mY3IotFKCQ

Mr. President, your comrade @MBuhari is killing his own citizens. We’re not saying u should send soldiers to Nigeria. Just pick up the phone and talk some sense into him. If u can’t do that then give me his number. Thank you.#EndSARS https://t.co/H5e3gzPcDW

If something happened in Europe you will be the first to speak! Your silence now won’t go unnoticed! What is ECOWAS doing? What are you doing? Heartless and selfish to do nothing in these time! #wewontforgetthisnana https://t.co/052wwejB6u

Ecowas chairperson but this be your only concern atm 💔#Endsars#LekkiMassacre https://t.co/kKYSiOh9ph

Others have also come to the defense of the President citing the United Nations Charter as the possible basis for the open silence of the ECOWAS leader on the events in Nigeria’s domestic front.

As President @NAkufoAddo should be seen respecting art 2 clause 7 of the UN charter which promotes non- interference unless ofcourse the abuses gets out of hand. He can call Buhari on the quiet to express his concerns but coming out now will be quite unorthodox. #EndSARS

“Article 2 (7) states that the UnitedNations has no authority to intervene in matters which are within the domestic jurisdiction of any State, while this principle shall not prejudice the application of enforcement measures under Chapter VII of the Charter.”

Ghanaians going after Nana Addo is a clear evidence that we as Africans just don’t like reading and researching. Just Petty sentiments and vibes !. There’s nothing Nana Addo Can do as PRESIDENT of Ghana since he’s THE CHAIRMAN OF ECOWAS. Stop being ignorant pic.twitter.com/qy7XKxNbIJ

Some of you ankasa anor dey bab. Why The Ecowas ebi Nana Addo ihn own?? Or he’s the one who established it?? Being the chairperson doesn’t mean he can stand up and do anything he feels like doing. Let’s be guided please

Meanwhile, as the drama unfolds, the deafening agitations by the Nigerians continue to ruffle furthers at the helm of the country’s affairs as its leaders grapple with the best approach to tackling the issue of ending brutality at the hands of security officials.

The government of Nigeria has declared war on its own citizens. The African Union and ECOWAS must call on President Buhari to stop the killing immediately.#EndSARS https://t.co/6sa5e8MVdx

The Nigerian Senate is also asking President Buhari to address the protestors immediately.

DISCLAIMER: The Views, Comments, Opinions, Contributions and Statements made by Readers and Contributors on this platform do not necessarily represent the views or policy of Multimedia Group Limited.
Tags:
#EndSARS
Akufo-Addo
Lekki Toll gate
Muhammadu Buhari
Nigeria
Protest