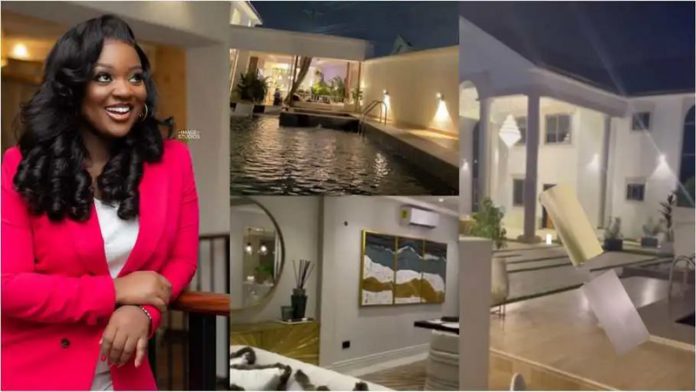 Popular Ghanaian actress, Jackie Appiah is currently topping the trends on Twitter a few hours after a video of her plush mansion hit the internet.

The mansion is undoubtedly one of the biggest in the country, and the video has gotten many people talking.

While some social media users have congratulated the actress for putting up such a huge building, others are curious about the source of her wealth.

Again, some netizens have decided to drag dancehall artiste, Shatta Wale’s name into the conversation.

This is because the musician, at the beginning of the year, heavily criticised the Ghanaian actress.

He alleged that Jackie made money through immoral means, and he could also earn enough wealth should he follow suit.

He further claimed that the actress is living under pretense.

Though Jackie Appiah did not respond to his attacks, some social media users are now trolling the dancehall king.

According to them, Shatta’s attacks have rather made the actress strong and confident enough to prove to Ghanaians that she is indeed capable of managing her own affairs.

She is said to have moved into the two-storey building in December 2021.

The beautiful house also has a swimming pool.

On this Jackie Appiah new house, one thing I observe in life there is a time for everything…

Time for sewing and for reaping..

She's reaping the fruit of her labour. Congratulations to her pic.twitter.com/NzZ9KLBDhQ

Jackie Appiah's Mansion Will Make You Feel Like Shatta Wale Is Living In A Cottage 😂.

Jackie Appiah is the definition of keep it lowkey and shock them with your results.

Seeing a lot of negative comments about Jackie Appiah’s house. For me,I don’t care about how she got the money to buy that house. Since she’s happy I’m also happy ❤️.

Jackie Appiah didn’t acquire all that through acting/filmmaking alone.

She has sponsors. She did things. She won’t tell y’all the full truth.

Jackie Appiah is super rich and humble too. God will continue to bless her 🙏🙏🙏 https://t.co/iMA7QbfpHS