Militant Islamists in Somalia have shot dead a Muslim woman for refusing to wear a veil, her relatives say.

Ruqiya Farah Yarow was killed outside her hut near the southern Somali town of Hosingow by gunmen belonging to the al-Shabab group, they say.

The militants had ordered her to put on a veil, and then killed her after returning and finding she was still not wearing one, the relatives said.

An al-Shabab spokesman denied the group had killed the woman.

Al-Shabab does not fully control the area where she was living, he added. 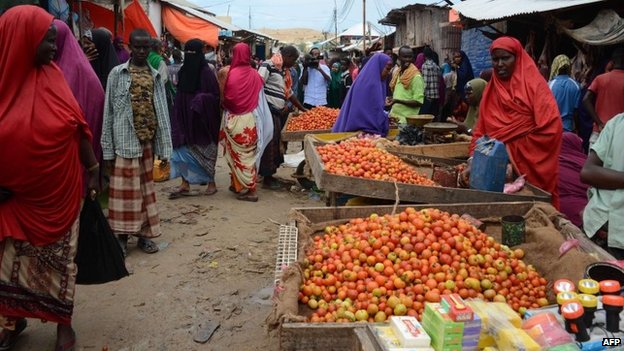 The capital, Mogadishu, is controlled by the weak UN-backed government

Relatives, who asked not to be identified for fear of reprisals, told the BBC that Mrs Yarow was killed at about 07:30 (04:30 GMT).

She was shot twice and died instantly, they added.

She is survived by her husband and children, the relatives said.

Al-Shabab, which controls much of southern and central Somalia, imposes strict rules of behaviour, including dress codes for men and women.

BBC Somalia analyst Mary Harper says the fact that al-Shabab has denied killing Mrs Yarow suggests that rogue elements within the group may have been responsible for her death.

It is also possible that al-Shabab wants to distance itself from the shooting because it is likely to provoke a strong public reaction, she says.