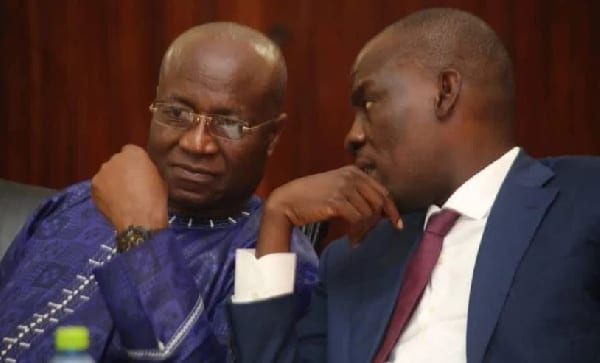 Majority Leader in Parliament, Osei Kyei-Mensah-Bonsu says recent conducts by the Minority in the 8th Parliament indicate that some NDC legislators are not informed on some Parliamentary practices.

His concerns stem from various opposition the incumbent government has encountered during the approval of some ministers-designate appointed by President Akufo-Addo, the debate on the 2021 budget statement, and the passage of the Appropriation Bill.

Speaking on JoyNews’ The Probe, the Suame MP told Emefa Apawu that although he seeks to work with the Minority due to the numbers of each Caucus in the House, their actions appear to be that of an “obstructionist opposition party.”

Recounting the activities of the House during the approval of Ken Ofori-Atta as Finance Minister, the Majority leader stated that even though the Minister was recommended, his approval “developed into something else with a hostile background bench rising up to say that ‘no, let’s subject it to voting.'”

This act according to him, resurfaced during the approval of the 2021 budget statement and the Appropriation Bill. He noted that reliance on headcount vote by the Minority to decide on significant matters is unparliamentary.

“The approval of the policy after the debate on the budget, the approval also ended up in a headcount. What is the point of this? To me, it looks like some of them don’t understand Parliamentary practice. Because it is the prime policy of the government. Assuming there were not sufficient numbers of the NPP in Parliament at the time and the policy had been voted against, what was going to be the implication?”

“It looks like people don’t understand the implications of what they do sometimes because with the headcount, when the NDC lost narrowly, 134:137, one of them who came to me then said to me, and he is a very loud member of the NDC. He said to me that yes, we were lucky if we had thrown out the budget – out voting it right, we would have had to come to Parliament, and then it would require a two-thirds majority to approve of it.

According to Mr. Kyei-Mensah-Bonsu, should the Minority have succeeded in rejecting the budget, the Majority Group “would have only matched up forces just the following day, move a motion of rescission to rescind that decision and come back to reinstate the original motion and vote for it.”

“You would only succeed in embarrassing government for maybe 24 hours. So what is the sense in doing that?” he quizzed.

The Majority leader who doubles as the Parliamentary Affairs Minister also told JoyNews that, on several occasions, he had had to inform the Minority on the right processes to follow in presenting their opposing views on the Floor of the House.

To him, a collective opposition through a representative to inform the Speaker on the reasons a policy cannot be accepted or should be dismissed so it is recorded in the Hansard is the best way to address matters in the House.

“I have been telling them that if on the matter of policy you disagree when it comes to voting in the House and maybe the question is put that yes, it is a voice vote, if you say I or nay and the Speaker pronounces that the I’s have it, if you say nay and it came from one side, the nay from that side will not be registered in the Hansard.

“So I have been telling them that if you want your question to be registered in the Hansard for posterity, what you have to do, as I was doing will be to get up and say that ‘Mr Speaker, on this matter as a matter of policy, we in the NDC as collective, we oppose this on the account of 1,2,3,4. We are not able to go along with the government, let it be so registered in the Hansard’. We move on, that is how Parliamentary practice is,” he stated.

The Majority leader indicated that should the Minority continue to oppose the Speaker’s voice vote declaration and insist on headcount voting, it “will be seen as a mere obstructionist” and “that is not good for a party that wants to be recognized as a government in waiting.”