South Africa sex crime: ‘We want our bodies to be secure 24/7’ 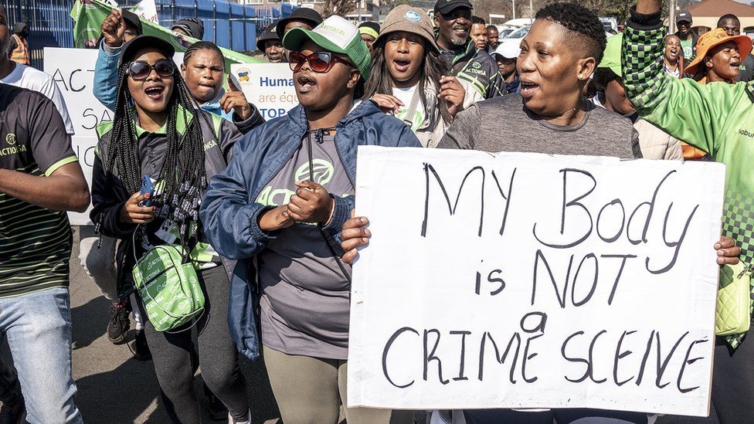 Outraged citizens and political parties alike have decried the attack

Some are calling for a state of emergency in South Africa after the vicious gang rape of eight women who were filming a music video last month.

It happened at an abandoned mine in the town of Krugersdorp, yet none of the 130 arrested suspects have been charged with rape because police say they are awaiting DNA test results.

Many of the suspects are thought to be miners working in disused mines without permission. Most are migrants from neighbouring countries and angry mobs have sought to track down foreign miners and torch their homes in retaliation.

Three of the rape survivors have spoken about their ordeal, which has left them traumatised and in search of answers.

“We thought we were going to die,” one of the survivors recalls. “They emerged from the bushes and mining shafts firing guns, telling us to get down. Some of us tried to run but were quickly rounded up.”

What followed was a horrific and prolonged sexual assault which lasted for several hours.

“We just laid down and held hands… I thought if I was going to die, I would die holding my sister’s hand… We kept praying a lot.”

One of the victims was singled out because of her build.

“They said I don’t have enough meat, I’m too skinny. They then threw me into a shallow hole and tried to bury me alive by covering me with sand,” she says.

Struggling to hold back her tears, another of the visibly shaken victims describes how she was beaten up for refusing to co-operate with her attackers.

“He kicked me and told me to put my clothes back on, but the others continued taking turns raping me [while] another pointed a gun at me.

“It was at that moment that I gave up. I thought I was going to die. I had no power over any of them, I couldn’t escape,” she recalls.

“I thought I was going to die just like a countless number of women who’ve been raped in this country.”

The Krugersdorp rape survivors are calling on police to do all they can to bring their attackers to book.

“We want them to rot in jail, we want our bodies to be secure 24/7, we also want safe spaces – we don’t want to be scared to go outside,” they say.

“We want to help the police with their investigation, so that our attackers are positively identified and prosecuted. We want to do this for all the other women who didn’t survive like we did.”

Some of them stripped and beat suspected illegal miners and torched some of their homes, in an attempt to deliver mob justice.

They allege that organised groups of illegal miners, known locally as Zama Zamas, are to blame for high levels of crime, violence and the gang rape of the eight women aged between 19 and 35.

“None of us are safe here as long these Zama Zamas are allowed to live among us – we’ve decided to take the law into our own hands,” said one protester, after police fired stun grenades and rubber bullets to disperse demonstrators who had blocked off roads.

Anti-foreigner attacks in South Africa have risen in recent years, and there is some concern that public anger about the rapes could be exploited by xenophobic groups.

Meanwhile, some locals who joined these latest demonstrations are wary of retaliatory attacks.

“We know they’ll take their revenge and the vicious cycle of crime that has been ongoing will continue unabated”.

Police have vowed to do more to protect women, after citizens accused them of failing to act fast enough.

“Rape is a rampant crime here, it’s like a hobby,” said Police Minister Bheki Cele as he addressed community members who were also calling for the deployment of the army.

“We need a specialised team of detectives to deal specifically with a number of rape cold cases where this crime is rampant,” he added.

“These Zama Zamas ordered their victims to watch as they took turns raping them. As society we cannot allow this to happen, they must be found, they must be punished accordingly,” he said to cheers from local residents.

August is women’s month in South Africa – it is meant to be a time for celebrations. But the reality is that most women fear for their lives.

South Africa has one of the world’s highest rate of rapes and sexual assaults, yet the conviction rate remains low.

Three years ago South Africa’s President Cyril Ramaphosa declared gender-based violence a national crisis, and in light of the recent gang rape, activists including Norma Mbele want a state of emergency declared so that rape and gender-based crimes are prioritised for swift prosecution.

The governing African National Congress has even called for rapists to be chemically castrated, in response to this latest case.

For now, many in South Africa wonder if those behind the Krugersdorp attack will be successfully prosecuted and convicted.

Otherwise, it is feared they will continue ruining yet more lives.