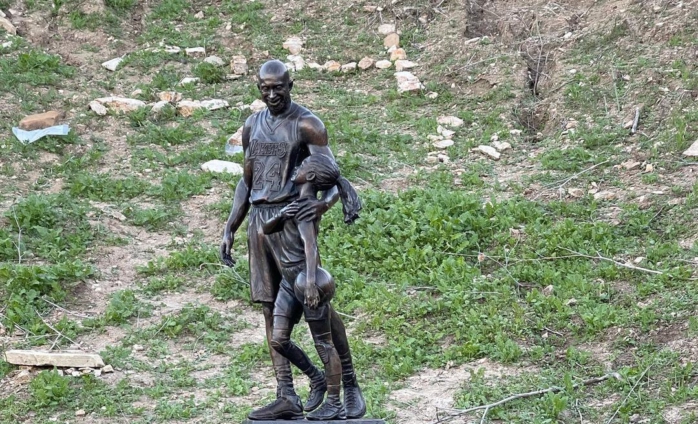 On Jan. 26, a statue honouring Kobe Bryant and his daughter Gianna was placed on the site of the helicopter crash in Calabasas, Calif., two years to the day of their tragic deaths.

Created by sculptor Dan Medina, the figure shows the beloved Lakers player, clad in his uniform, with his arm around his 13-year-old daughter as she holds a basketball. The two are depicted with big smiles across their faces.

At the base of the 160-pound bronze statue is the quote, “Heroes come and go, but legends are forever,” along with the names of all nine victims who perished in the 2020 accident, according to TMZ.

Medina told TMZ Sports that the statue was just a temporary tribute and said he planned to take it down by sundown. He did say, however, that he hopes the city will eventually allow him to put up a more permanent version of his art.

Kobe and Gianna were killed when their private helicopter crashed while they were travelling to a teen basketball tournament at Kobe’s Mamba Sports Academy near Thousand Oaks, Calif.

Seven others died in the crash, as well: John Altobelli, a baseball coach at Orange Coast College in Costa Mesa; his wife, Keri Altobelli; their daughter, Alyssa Altobelli; Christina Mauser, an assistant Mamba Sports Academy basketball coach; Payton Chester, a player on the team; her mother, Sarah Chester; and Ara Zobayan, the pilot.

Four months after the crash, the Los Angeles County Department of Medical Examiner-Coroner determined the cause of death for all of the passengers to be blunt trauma and the manner of death was accidental.

Investigators later determined the pilot of the helicopter appeared to violate federal standards and likely experienced “spatial disorientation” while flying through clouds on the foggy morning.

In addition to Gianna Kobe and wife Vanessa Bryant have three other daughters—Natalia, now 19; Bianka, now 5; and Capri, now 2.

In Kobe’s final interview, published a week before his death, he talked to USA Today about his work coaching youth sports and creating The Wizenard Series of children’s books.

“You got to do what you love to do. I love telling stories,” he said. “I love inspiring kids or providing them with tools that are going to help them.”