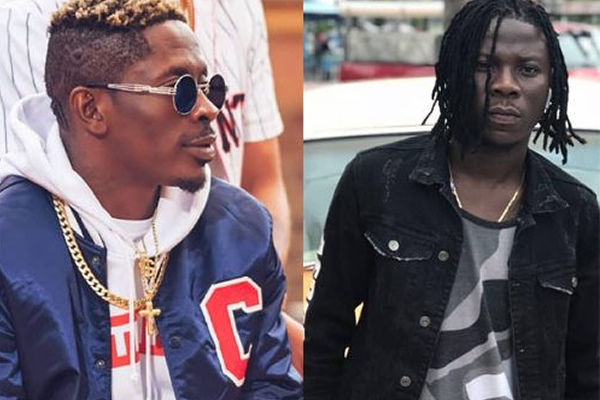 Dancehall artistes Stonebwoy and Shatta Wale have pleaded not guilty to Offensive Conduct to Breaches of the Peace.

Stonebwoy, born Livingstone Etse Satekla, also pleaded not guilty to an additional charge of Display of a Weapon in a Public Place without permission.

The charges were read to them during their appearance at the Agyebeng Court, Wednesday.

Shatta Wale and Stonebwoy were arrested by the police on Sunday over a brawl that erupted between their camps at the 20th anniversary of the Vodafone Ghana Music Awards.

Pandemonium broke out shortly after Stonebwoy was announced the winner of ‘Reggae/Dancehall Artiste of the Year when Shatta Wale and his team were seen going towards the stage, their intentions unclear.

Read: Stonebwoy explains why he pulled a gun on stage

Shatta Wale, born Charles Nii Armah Mensah, later claimed that he was going on stage to congratulate Stonebwoy. The two artistes were later released on Monday.

Read: It will be illogical for me to deliberately ruin VGMA@20 – Shatta Wale

The dancehall artistes, who have not seen eye-to-eye for years now, appeared in court with some family members and scores of supporters.

They both looked cheerful and responded to chants from their supporters as they walked out of the courtroom.

After the hearing, they were granted bail of ¢50,000 each with one surety and cautioned to be of good behaviour until the determination of the case.

They will re-appear in court on June 20.

Read Police statement on the charges below:

DISCLAIMER: The Views, Comments, Opinions, Contributions and Statements made by Readers and Contributors on this platform do not necessarily represent the views or policy of Multimedia Group Limited.
Tags:
VGMA 2019