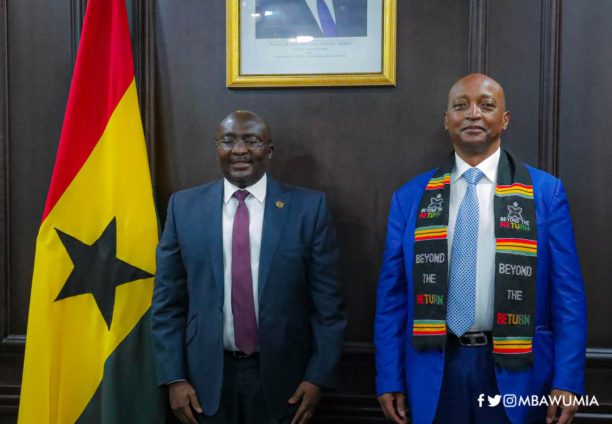 Ghana’s Vice President, Dr Mahamudu Bawumia, has urged the Confederation of African Football (CAF) to strengthen CAF-inter club football competitions to make it financially rewarding for clubs on the continent.

Clubs who participate in Africa’s inter-club competitions often complain of debt due to insufficient funding for the exercise.

Welcoming new CAF President, Dr. Patrice Motsepe to the Jubilee House, Ghana’s Vice President congratulated him on his recent election and also urged him and CAF to strengthen Africa inter-club competitions by making it more financially rewarding through partnership with the private sector.

“It’s been seven months on the job and it’s not too late to congratulate you. This is the first opportunity to do so at our end.”

“I think your election, generally, continent wise, there has been so much excitement about it because as a club owner, the clubs know that you understand their problems so sitting as CAF President, you can help them. So there is this excitement that from your background, you have taken over the CAF Presidency and we are looking forward to big things.”

“One of the things I will like to see is that for the African Inter Club Championship, you know that it is not financially rewarding and we will really like to see it strengthened a bit so we see how we can bring about some financial benefits from participation because the clubs are generally financially weak.”

Dr. Bawumia also commended the new CAF President’s personal commitment to developing grassroot football across the African continent, through the CAF Pan Africa International School Football Championship, as well as to CAF for some of its recent reforms.

“Since you have been in office, you have began a number of reforms which we are excited about.”

“Let me congratulate the Motsepe Foundation for your $10m donations for the Pan African Inter-School Championship which we think it’s just fantastic. It shows the personal commitment that you have.”

“What is very clear is that you are very committed to grassroot football development.”

“Generally speaking, I think CAF has done well. If you look at the African Cup of Nations, we have moved from 8 to 12 to 16 and now to 24 and this is really very good because you know our continent is football crazy. So having 24 teams in there makes it more competitive because we all feel we are in a better position to win.

“We are very happy with what you’re doing. It’s very fantastic and we want to congratulate you.”

“We are also ready to support whatever plan you have which will take African football forward to the next level.”

The CAF President also commended the government of Ghana, as well as both President Akufo-Addo and the Vice President for their commitments to the development of football in Ghana.

The CAF President, who was accompanied by his wife and son, is in Ghana to participate in the YouthKonnect Africa Summit