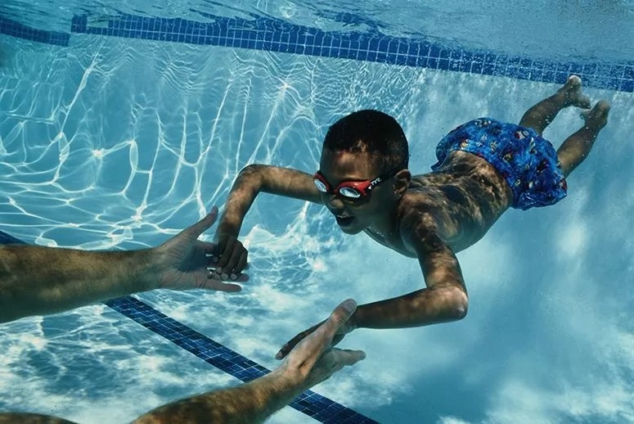 Swimming has become a sporting activity trend in Ghana. Swimming is gradually becoming another huge exercise activity in Ghana.

In this article, I take a look at the scientific perspective of swimming on our health as some studies found that swimming put the heart and lungs into a good state of health.

Some researchers even believe that swimming can reduce your risk of death. Juxtapose with inactive people, swimmers have about half the risk of death. Some other studies have shown that swimming may help lower blood pressure and control blood sugar.  Researchers have suggested that adults need 150 minutes of moderate activity or 75 minutes of vigorous activity each week.

This means that one can derive the benefit from swimming.

Interestingly, an hour of swimming can be compared to running in terms of burning calories.  The Center for Disease Control(CDC) found that swimming is the fourth most popular activity in the United States. They explained it is due to its numerous health benefits.

Are Ghanaians aware of the scientific benefits of swimming?

Marcin, A (2017) article found the following health benefits of swimming:

Marcin, A(2017) also recommended the following strokes in swimming workout:

Each stroke has its  target, besides, the water provides a gentle resistance. However, irrespective of the type of stroke one adopts, most of the muscles worked together in the water.

Apart from the muscles which benefit when one swims. The cardiovascular system is also another area where swimming makes the heart and lungs strong.  Interestingly, researchers believe that swimming cut your risk of death as espoused by the Center for Disease Control(CDC) report. The report found that compared with inactive people, swimmers have about half the risk of death.

The CDC also reports that swimming exercises support those with arthritis as it improves the use of their arthritic joints without worsening symptoms. It further notes that People with rheumatoid arthritis have shown more health improvements after participating in hydrotherapy (exercising in warm water) than with other activities.   Water-based exercise can also improve the use of affected joints and decrease pain from osteoarthritis.

Marcin, A(2017) notes that Swimming can be a safe exercise option for people with:

Marcin further notes that swimming may even help reduce some of your pain or improve your recovery from an injury.  This supports one study by Alkatan  al.(2016) which found that  people with osteoarthritis reported significant reductions in joint pain and stiffness, and experienced less physical limitation after engaging in activities like swimming and cycling.

What interests me in this study is that the benefits of swimming exercise were similar to the more means prescribed land-based cycling training. This means, there was little to no difference in the benefits between the two groups and whether you swim or engage in bicycling, the benefits remain the same.

It also supports multiple sclerosis. The reason why those with multiple sclerosis (MS)  appear to benefit from swimming is that water makes the limbs float, thus supporting the legs when one is swimming. Water also provides a gentle resistance.  In one study by Castro-Sánchez et al.(2012), where a 20-week swimming program was evaluated, the researchers found an improved reduction of pain for people with MS.  The participants further demonstrated a better quality of life care.

Marcin, A(2017) found that the humid environment of indoor pools is ideal for making swimming a great activity for people with asthma.

This was confirmed by an earlier study by Sable et al.(2012)which found that breathing exercises associated with the sport, like holding your breath, may help you expand your lung capacity and gain control over your breathing.

Additionally, one negative study by  Fisk et al.(2015) found that swimming may increase your risk for asthma because of the chemicals used to treat pools. It is, therefore, advisable for asthmatics to take caution if they decide to engage in indoor swimming. Alternatively, Marcin, A(20170 recommends a pool that uses salt water instead of chlorine.

Swimming is an efficient way to burn calories. The Mayo Clinic held the view that a 160-pound person burns approximately 423 calories an hour while swimming laps at a low or moderate pace.

Marcin, A(2017) has this to say: “To compare these numbers to other popular low-impact activities, that same 160-pound person would only burn around 314 calories walking at 3.5 miles per hour for 60 minutes. Yoga might burn just 183 calories per hour. And the elliptical trainer might burn just 365 calories in that hour”.

Better sleep pattern was reported when one swims. This was confirmed in one study by Reid et al.(2010)  which involved older adults with insomnia. The older adult found improvement in their  quality of life and sleep after engaging in regular aerobic exercise. This is good news for older adults struggling to sleep who can swim as well.

For mood or mental support, a clinical trial by  Neville  et al. (2014)  examined a small group of people with dementia and found progress in mood after  taking part in a 12-week aquatic program. On the part of stress, one study in 2015 was published in the International Journal of Physical Education, Sports and Health where the researchers surveyed a group of swimmers instantly before and after swimming at a YMCA in New Taipei City, Taiwan. Of the 101 people surveyed, 44 reported being mildly depressed and feeling stress related to the fast-paced life. After swimming, the number of people who still reported feeling stressed decreased to just eight.The researchers conclude that swimming is a potentially powerful way to relieve stress quickly.

Swimming benefits also extend to Pregnant women and their babies.  Marcin, A(2017) notes that in animals, a mother rat’s swimming was shown to alter the brain development of her offspring. It may even protect babies against a type of neurological issue called hypoxia-ischemia, but more research is needed.  The author further held that apart from swimming impact on the child, it can be performed in all three trimesters.

This was demonstrated in one study by  Juhlet al.(2010) which found that there is no side effect in swimming in chlorinated pools for pregnant women.  Marcin, A(2017) explained: “In fact, pregnant women who swam during their early to mid-pregnancy had a lower risk of preterm labor and congenital defects”. This notwithstanding, the author further warned:

“Keep in mind that while swimming is generally considered safe during pregnancy, some women may have activity restrictions due to complications in pregnancy. Talk to your doctor before starting any new exercise programs during pregnancy, and if you have complications, ask about activities that are safe”.  Is swimming good for kids?The CDC(2022) explained that children need a minimum of 60 minutes  of aerobic exercise each day and swimming is a good option for them.

The CDC(2022) recommends that children need a minimum of 60 minutes  of aerobic exercise each day and swimming is a good option for them.

Swimming is another good form of Naturopathic protocol that can have a holistic impact on your health.  For those swimmers, the science is clear for you to swim more. For those considering swimming to derive the benefits including myself: We can start from somewhere by getting a swimming lesson trainer.

We must obey the rules at the pool whether experienced or inexperienced.  Though generally safe, for those injured or have certain medical conditions, always confirm with  your doctor.  Marcin, A(2017) also explained that People with skin conditions like psoriasis, for example, may get more irritated in the chlorinated pool water. It is best to seek medical advice first.

Prof. Nyarkotey  has strict sourcing guidelines and relies on peer-reviewed studies, academic research institutions, and medical associations to justify his write-ups.  My articles are for educational purposes and do not serve  as Medical advice for Treatment. I aim  to educate the public about evidence-based scientific Naturopathic Therapies.

The author is a Professor of Naturopathic Healthcare and President of Nyarkotey University College of Holistic Medicine & Technology (NUCHMT)/African Naturopathic Foundation. E-mail: collegeofholisticmedicine@gmail.com.