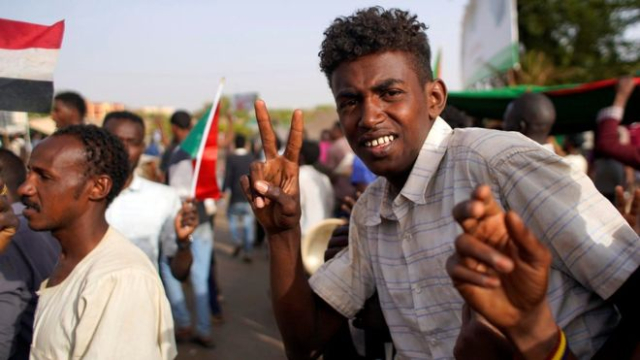 The military leaders who carried out a coup in Sudan on Thursday have sought to reassure people that their only concern is public order.

A spokesman said Sudan's future would be decided by the protesters who took to the streets to demand President Omar al-Bashir's removal.

But protesters remain camped out in the streets of Khartoum, fearing the coup leaders are too close to Mr Bashir.

The military says it will not extradite him on war crimes charges.

Mr Bashir is the subject of two international arrest warrants issued by the International Criminal Court (ICC), which accuses him of organising war crimes and crimes against humanity in Sudan's Darfur region between 2003 and 2008.

However, he may be put on trial inside Sudan, according to the military council set up after the coup.

Mr Bashir, one of the world's longest-serving leaders until he was ousted on Thursday, is now in custody.

His downfall followed months of unrest which began in December over the rising cost of living. At least 38 people have died in the protests.

What are the military offering the protesters?

The army has said it will oversee a transitional period followed by elections. As part of this, it is imposing a three-month state of emergency, with the constitution suspended.

The military council will be in place for a maximum of two years, it says, but could last only a month if the transition to civilian rule is managed smoothly.

Lt-Gen Omar Zain al-Abidin, who heads the military council's political committee, said on Friday: "The solutions will be devised by those in protest.

"You, the people, will provide the solutions for all economic and political issues. We have come with no ideology, we have come here to maintain order and security to provide the opportunity for the people of Sudan to achieve the change they aspire to.

"We have no ambition to hold the reins of power. We are here to provide an all-inclusive umbrella.

"Our key responsibility is to maintain public order," he added. "We will have zero tolerance for any misdeed in any corner of the country."

Why are protesters so wary?

Thousands remained camped out near military headquarters in the capital on Friday, ignoring a curfew declared by the military. 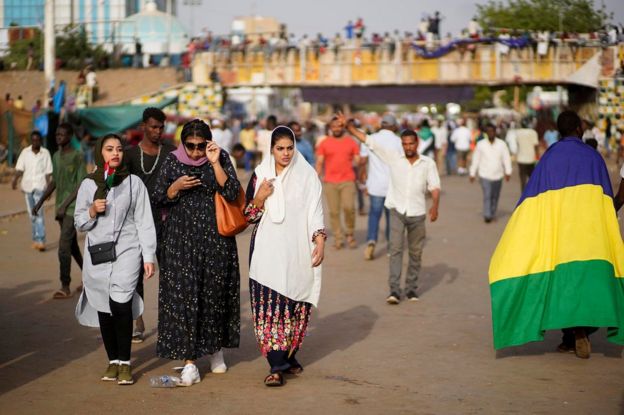 They are demanding a transition to civilian rule before they return home.

The new military council is headed by Defence Minister Awad Ibn Auf, who was previously regarded as being well placed to succeed Mr Bashir.

During the Darfur conflict, he was head of military intelligence. The US imposed sanctions on him in 2007 in relation to his alleged support for militia blamed for atrocities in Darfur.

Sara Abdeljalil, a member of the Sudanese Professionals' Association (SPA) which has spearheaded the protests, said on Thursday that the new military council was a "continuation of the same regime".

"So what we need to do is to continue the fight and the peaceful resistance," she said. 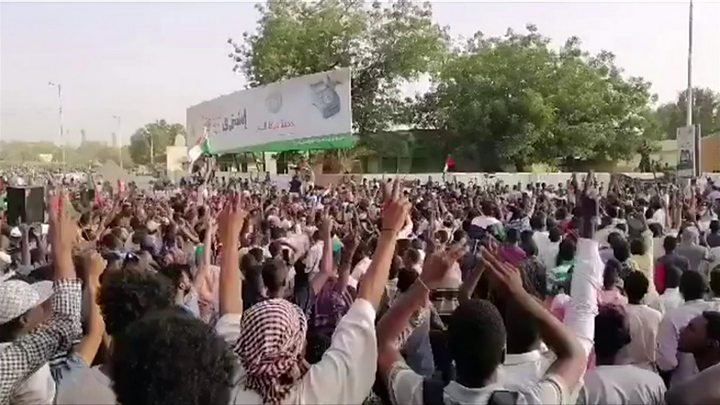 Reacting to the military's conciliatory statement on Friday, Khartoum resident Tagreed Abdin told the BBC she was not reassured.

"First of all, we don't know who's behind the military council," she said.

"We are used to hearing government double-speak but we need to see if they're really interested in dialogue and listening to the voices of the people."