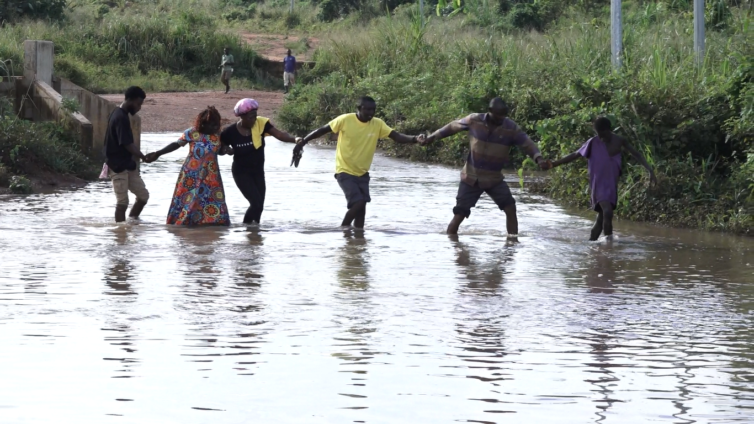 Passengers crossing the water to join a car

Residents of Sunyani West Municipal in the Bono Region say the deplorable nature of roads in the municipality is greatly affecting every aspect of their daily lives, including education, health, and farming activities.

During the rainy season, not only do residents struggle with un-motorable roads, but also some communities are cut off from the district capital, Odomase, as water overflows uncompleted bridges, and they are consumed by dust during the dry season.

A visit to the municipality by Joy News confirmed the terrible nature of the roads, such that some residents say they will not vote for the government in the next elections if the situation does not change.

The Municipality, with a population of over 135,000 people, mostly farmers, was elevated to municipal status in November 2019, and it is saddled with many challenges like other assemblies in the region.

Of major concern to the residents in a municipality that shares boundaries with 7 other assemblies, including Dormaa East, Berekum East, Sunyani East, Tain, and Wenchi, are the about 40km Odomase town roads, 30.17km Odomase – Adentia – Badu road, and the 44km Odomase – Tainso – Seikwa Nkwanta road.

Though the contract has been awarded, the Municipal Chief Executive, Evans Kusi Boadum, said the contractors left the site simultaneously after the 2020 general elections leaving drivers and passengers –farmers, patients, health workers, teachers, etc with no option but to hold their breath and move through the flash water.

With a tired look and sitting by the roadside near her farm on the Odomase Tainso road, 60-year-old Afia Munufie says it’s a struggle to get drivers to cart their farm wares to the market.

“The government sometimes brings a contractor, and you will see a caterpillar on the road, but they leave after a short while. There are many farmers with foodstuffs who use the road. If you pick a car to convey maize from the farm, they get stuck. Because of that, the drivers won’t come for your load if they are far”, she lamented.

A young maize farmer, Raphael Ankyier, who was seen pushing his motorbike through the water, said the nature of the roads discourages the investment of money and time in farming.

After close to an hour of waiting to see how drivers cross the water and continue their journey on the many potholes –abandoned roads, only Kwaku Addai showed up. He had to offload the passengers so they walk through the water.

He said, “We always push the car through the water. It is the bridge the authorities should come and fix. You can hear the sound of my alternator and timing belts. Water has entered the ball joint, shaft, and grease, and we go for maintenance after every trip”.

“We have nothing to say but beg the authorities to fix the road”, he appealed.

A passenger, Madam Anima, narrated that she had to leave her sick father at the village clinic because he could not walk through the water for healthcare at the hospital.

“We faced the same challenge last year. The road is bad. People’s lives are at risk here. We appeal to the authorities to come to the aid of Sunyani West”.

Madam Abena, another passenger, said, “People in Odomase are also human beings in the country. We don’t know our crime for which reason they have neglected us or because they know it’s an NPP stronghold. We will change our way of voting in the next elections”.

The residents are outraged, such that the MCE, Evans Kusi Boadum, claims he is often verbally abused and accused of doing little to help improve the situation, though he refutes such claims.

“I can show you some evidence of reports I have sent across, and in one of them, I mentioned that I am helpless at this stage, desperate and down spirited over the state of affairs”, he said.

According to him, the contractors said they have not received what is due them. He, therefore, appealed to the Roads and Finance Ministers to act fast and speak the language the contractors would understand for them to return to the site to reduce the suffering of the people in Sunyani West.

Until the government ensures the contractors return to the site, the nightmares of residents on the Odumase Tainso Badu roads and others in Sunyani West will continue.

DISCLAIMER: The Views, Comments, Opinions, Contributions and Statements made by Readers and Contributors on this platform do not necessarily represent the views or policy of Multimedia Group Limited.
Tags:
Deplorable Roads
Evans Kusi Boadum
Sunyani West Municipal Assembly