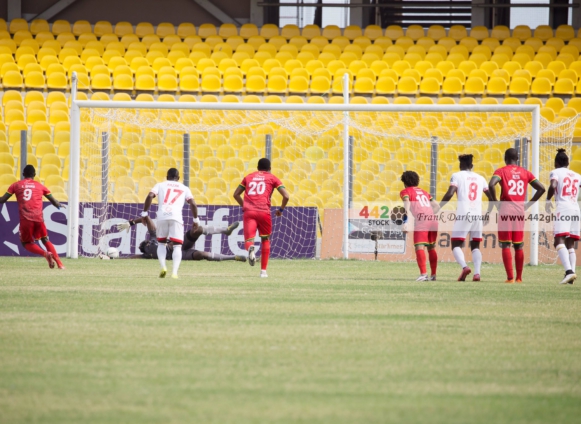 “What I need from them [supporters] is,” elated Samuel Boadu, began a message meant for supporters ahead of Sunday’s game against Asante Kotoko.

“They should come in their numbers and support the boys,” he continued. “We are going to deliver,” the former Medeama boss declared.

History has shown that, since 2013, Hearts have won one (1), drawn one(1), and lost five (5) against Kotoko at the Accra Stadium in seven (7) competitive attempts, including a Normalisation Committee Cup via penalty shoot out. Many fans are cautiously optimistic of a win, but the man tasked to oversee an end to their 11 years of failure to win the title allayed potential fears of another defeat.

“They shouldn’t worry at all,” he assured.

During this interview, one could hear cheerful supporters singing at least, 100 metres away. They were singing on top of their voices because the team they love reclaimed top spot from rivals, Kotoko. They were singing because it was another step towards annexing that eluded trophy.

This club, its fans are beginning to believe. The ghost that has haunted this history-making club appears to be on the verge of being exorcised. It’s been about 11 years of emotional trauma. 11 years of losing that trophy-winning credentials, but this might just be the year. Eight games, seven wins, and a draw is a testimony of a club that has regained a deed it was known for in the late 1990s and early 2000s.

However, since the famous flotation of shares, since that famous sacking of Kosta Papic for losing bizarrely to nine-men King Faisal in 2009, this club, that adores history, has not been anywhere near the pedestal, many claim they deserve.

Supporters have often taken Board Chairman Togbe Afede, XIV, to cleaners for what they say, is mismanagement of a club they have loved for years, his hidden critics have questioned his desire to win laurels; they never lose an opportunity to reprise what a few say, ‘running a one-man show’ and that ‘Hearts is not a one-man club,’ but since the arrival of Samuel Boadu the fortunes of this Oak family seem to be on a track never seen in recent years, and that has gotten a disunited family united.

This weekend, when the players walk out of that tunnel to face Kotoko, their enemies who have a knack for ending their parties, 10,000 eyeballs will be on the stands to witness what could be a history-changing era, while millions will be watching from home.

Physically, many will be afar, but emotionally, they will be closer with a deep breath and a sense of belongingness, expecting Boadu and his boys to cross that line.

The stakes in the game are higher — it was expected considering the two clubs are level on points. Hearts have not lost a game in 10 outings, while Kotoko has not lost any in 11 games. Though this might not be a destiny-defining match, it is certainly a hurdle when crossed successfully, it will be about catching me if you can.

Kotoko coach Mariano Baretto said “we are facing each match to win the league”, but this game goes beyond just the outcome to help win the league. It is a game with many storylines, but the ultimate storyteller will be Daniel Laryea, the matchday referee.

Kotoko supporters brazenly wrote a letter and copied the presidency, alleging manipulation of matches in favour of Hearts. A planned demonstration against the Ghana FA was halted recently. Some of the placards had inscriptions, “GFA, STOP THE HATE” and “ASANTE KOTOKO WANTS FAIR PLAY.”

It is within the right of supporters to demand fair play if they have any reservations. They have seen more than enough to hold a suspicion.

For instance, when the clock ticked 48:37 seconds, the cameras caught the eyeballs of Nii Odartey Lamptey, interim head coach of Elmina Sharks, he looked visibly distressed, his fingers holding his waist; he balanced his body to the right, and back to the left before lifting his right hand, and pointed a finger to pitch, murmuring some words in unison of his gesture to his assistant coach who was on the touchline with him.

The noise in the stadium could not permit one to hear him unleash his emotions: It was not vicious. It was not belligerent, but one could tell, reading from the movement of his lips, a complaint about a penalty awarded against his team seven minutes earlier.

The ball had hit the shoulder of Kingsley Adjei, a partisan crowd screamed for a penalty, referee, Maxwell Owusu, initially unsure of the appropriate decision – ignoring the appeal from players and supporters or awarding a penalty, pointed to the spot.

Elmina Sharks would later protest, but could not overturn the decision. They rather ended up losing a man for being badass towards Mr Owusu.

He showed his power, one that is superior to anyone at the stadium. The ramifications of his arbitral award were dire: emotional toll on Sharks, and his ‘incompetence’ exposed.

It would get worse as he overruled his assistant’s flag for the penalty to be retaken because Sharks goalkeeper Osei was off his line before Aidoo took the kick.

Matchday colour commentator, Jude Acheampong said “…he is making a mess of himself here,” in a tone that sounded flummoxed at the decisions.

He did make a mess of himself, but Hearts would go on to miss that kick – describe it as a cheat from a Phobia perspective and you won’t be far from right because the goalkeeper was off his line before the ball was kicked.

Call it double cheat as Sharks also felt cheated with that call which resulted in the red card. But, take a look at it this way: the same referee people say took a dubious decision in favour of Hearts, within the same period, made a decision that went against the same Hearts of Oak by overruling his assistant’s flag for the penalty to be retaken.

However, many continue to miss that fact weekly. Creating a notion that might be non-existent. The incidents in that game might have been the 14th decision by a matchday referee to lead the discussions on social and mainstream media for what they say is poor officiating.

Though the number has since shot to 22 in 30 matches, averaging an incident in more than 50 per cent of matches played, it does not change the fact that these are pure human errors, or better still, incompetence.

Either way, you may be correct because such incidents have become one too many. Earlier, King Faisal was at the receiving end of a decision many thought was a penalty against Hearts of Oak. It was match week 23. Phobia skipper Fatawu Mohammed appeared to have fouled Ibrahim Zubairu in the box, but referee Maale Imgrede ignored the calls for a penalty.

Then head of the technical bench of the Insha Allah boys Kasim Goryildzi, would later break his promise of not excoriating referees, saying “…such referees like today are destroying the hope of a whole team.”

He felt he’s had enough.

A colleague, Vladislav Viric, coach of Dreams FC described his team’s 3-1 loss to Asante Kotoko on matchday 23 to the ‘three men in black’ aiding their loss.

Kotoko also complained about a penalty against them. The same referees get battered by both teams. Who is cheating for who?

About seven coaches have been hauled before the FA’s Disciplinary Committee for berating referees. Ernest Thompson of Dwarfs was the first to go gung-ho at a referee when his team lost to Techiman Eleven Wonders on the second match week of the season. Maxwell Konadu, Henrik Lehm, former Coaches of Asante Kotoko and Inter Allies would follow before they were relieved of their duties.

Since then, there seems to be a perennial distrust in referees. A distrust that has found its way into the corridors of the Ghana FA, breeding a perceived plot to have Hearts of Oak end their over a decade wait to win a league title.

Hearts are gutted and have called out  Kotoko for denigrating the image of the game. Over the last decade, they have been tagged perennial underachievers. Critics of their so-so performances yearly may not be far from right about a club with so much history. They want an end to the consistent failure, and for that to end, the leadership must change their haphazard way of managing the club.

This season appears to be different, a different season that has seen them sit at the summit of the league table for the first time in five years with 12 points matches to play for, but many believe they have been aided by horrendous officiating from referees. To put it bluntly from the perspective of some Asante Kotoko supporters, a deliberate plan by the FA to help Hearts win the title.
This sounds hogwash. It sounds hogwash because every club benefits from poor officiating in the Ghana league, every club gets to the dagger of referees at times, and the attempts to consistently paint referees as conduits of some teams success or failure is irresponsible, unhealthy, unscientific, and unwitty.

The examples cited justifies, a sledgehammer is being used on a termite.

We all demand better officiating for Ghana’s football, we all understand how decisions from referees impact the state and minds of players, but when players give their all to win matches, that energy should not be buried for a referee’s error.

They are humans and are not immune to errors. So-called bad refereeing in the past years, as revealed by Tiger Eye PI in their number 12 documentary might have found its way into the very fabric of the country’s football, but the everlasting perception that mistakes made by referees are deliberate is a canker in itself.

The refereeing industry must be fixed to the level field for participants, we all agree, refereeing might need game owners to help erase the notion that mistakes made are deliberate attempts to manipulate the outcome of matches, we all agree, but fans and media, two parties who are stakeholders in the country’s football must efface the lenses of dishonesty they use to obliterate officials and the game will be what everyone calls for.

Daniel Laryea, arguably the country’s best referee had a blunder when Kotoko played AshGold and many tongues would sharpen awaiting a slip to pounce on, but for Ghanaians to appreciate its domestic football, the lenses must be switched to talents on the pitch, and not the whistle in the mouth.

The ‘Super Clash’ has the ingredients to market this product which took a nose dive years ago, and the responsibility for the world to buy this product will not be achieved through perception.