Supermarket chain comes under fire for selling bouquet of autumn leaves for $7.5 - MyJoyOnline.com

Supermarket chain comes under fire for selling bouquet of autumn leaves for $7.5 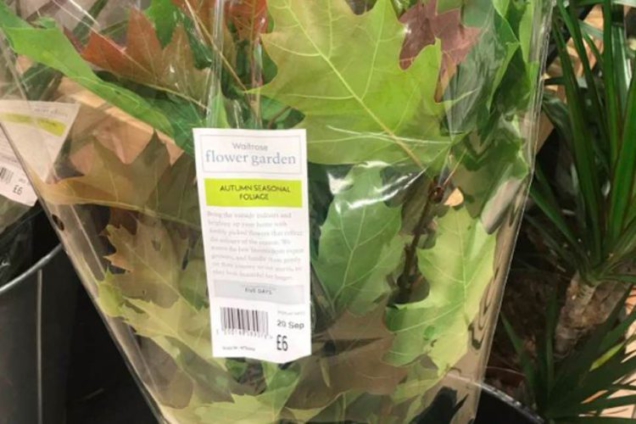 UK-based supermarket Waitrose has been slammed by social media users for selling bouquets of “autumn seasonal foliage” at £6 ($7.5) apiece.

Photos of various tree leaves packaged in transparent plastic foil and arranged as flower bouquets went viral on social media this week, sparking controversy because of the product’s price, six British pounds, of seven and a half dollars.

Considering tree leaves can literally be picked up from the street this time of year, it’s understandable that some people went after Waitrose, accusing the supermarket of trying to make money by selling something that is actually free.

“This has got to be from the drunk Monday morning meeting category of ideas,” someone else commented.

Apparently, the bizarre foliage bouquets appeared on Waitrose supermarket shelves as a way to welcome autumn, and featured a sticker urging customers to “bring the outdoors inside”.

“Bring the outdoors indoors and brighten up your home with freshly picked flowers that reflect the colors of the season,” the official product description read. “We source the best blooms from expert growers, and handle them gently on their journey to our stores so they look beautiful for longer.”

Despite the generally negative feedback to its autumn-themed product, the British supermarket explained its decision to charge $.5 for a bunch of tree leaves by claiming that it was inspired by a demand from shoppers.

“We’ve seen a really strong demand for autumn foliage – our customers love using these to mix in with their seasonal flowers to brighten their homes,” a Waitrose spokesperson told The Sun.

Hello @waitrose I applaud you for trying to sell customers a bunch of leaves for £6. You are having an Autumnal laugh #leavesforlaughs pic.twitter.com/uXWIJCIasy

Interestingly, there were those who seemed to somewhat justify the price tag of this bag of leaves by saying that it was obviously “high quality foliage”. That may be true, but considering you could buy flower bouquets or even bottles of wine for that same price or less, it still seems like a money grab.

This isn’t the first time that English shops and supermarkets make news headlines for selling free things at exorbitant prices.

First, there Sally Bourne Interiors, a posh shop in London, that sold painted logs for $14 apiece, and there was artisan shop Botanique and its $22 chopped tree branches.

I wonder what they’ll think of next, rocks maybe? Oh wait, that’s already been done…